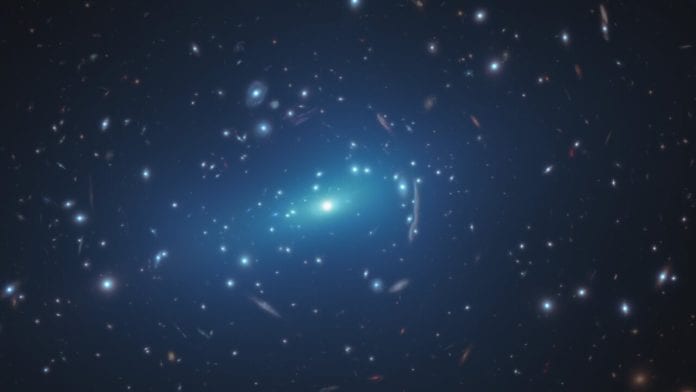 Dark Matter is appropriately named, theorized to account for most of the Universe’s missing mass. It is invisible and cannot be directly detected by the instruments and techniques of our time. When physicists tried to survey the Universe, they found that some of the phenomena that we can observe with our instruments cannot be explained by the observable distribution of mass and energy.

Therefore, to explain it, they invented a very wacky concept, the concept of Dark Matter and Dark Energy. There has been some success when it comes to explaining all the effects of such a concept. However, it remains largely unresolved.

In a new observation, researchers have found that apart from the usual bending effect that Dark Matter has on incoming light from distant galaxies, there seems to be a part of this mysterious substance that is bending light more than it is supposed to.

While we can detect the presence of Dark Matter by the gravitational pull it exerts on nearby stars, the bending of light can tell us if some of it lies in between some distant galaxy and our home. The researchers have found that the number of clumps of this material that are bending light in this manner is surprising. These observations were made for clumps in distant clusters of galaxies. These clumps also have galaxies embedded in them and are denser than expected.

There are some deep implications that come from this finding. A potential reason for such an observation could be that the computer simulations utilized the wrong methods to predict the galaxy cluster behaviour. The other more grave implication is that our understanding of Dark Matter is wrong. The bending effect, also known as gravitational lensing, is a direct implication of Einstein’s theory of relativity.

According to the computer simulations, the population of galaxies surrounded by dark matter, that are massive enough to cause such distortions should be on the lower side. Researchers were studying about eleven Galaxy clusters when they realized that their count of thirteen cases of severe lensing was more frequent than what the simulations had predicted.

The observations indicate that there are more high-density dark matter clumps in real galaxy clusters than in simulated ones. While the observations and simulation results seem irreconcilable, some researchers think that the problem lies with our computer simulations, not our understanding of Dark Matter.

Upcoming new telescopes such as the Euclid telescope and the Nancy Grace Roman Telescope can help clear up the matter. Large samples of observation can be taken using these and could help us understand where the fault lies.