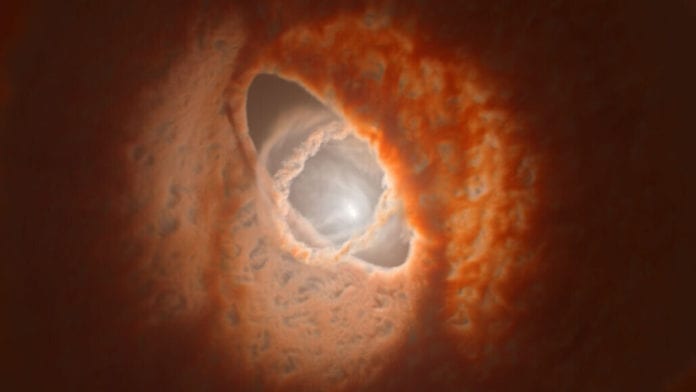 A triple-star system is relatively rare in the Universe. While most star systems that we know of have a single star with a lot of material orbiting it, there are some unique systems as well, which are particularly an area of interest for physicists. Binary star systems are another kind of system where two stars orbit each other, with many other celestial objects orbiting them. In a Triple-Star system, as the name suggests, three stars are orbiting each other. One example of such a system is GW Orionis.

Located about 1,312 light-years away from our planet, GW Orionis lies in the constellation of Orion. The system is very interesting because of the three-star setup. There two inner stars, GW Orionis A and B, orbit each other, and the third star GW Orionis C orbits them from a little distance away.

Other than the three-planet setup, the biggest surprise for the researchers was the protoplanetary disks that orbit the system. All three massive disks have a different orientation and are located at a distance of 46, 185, and 340 AU from the centre, respectively.

The innermost ring is highly misaligned, and the outermost one is the largest protoplanetary disk that the researchers have ever seen. The protoplanetary disks are incredibly far from their parent stars; for comparison, Neptune is only 30 AU away from our Sun; on the other hand, the nearest disk in the system is 46 AU away.

The most surprising thing about the system was the heavy misalignment of the inner disk. The researchers had to deduce the real orientation of the constituents by measuring the shadows of one ring falling on another one. Even the orbits of the stars are not aligned with each other, and the stars do not lie on the same plane.

The various levels of misalignment in a triple-star system to this extent have never been seen before. The researchers are largely crediting the misaligned disks to the fact that the competing gravitational forces of the stars can rip apart such a loosely held celestial structure.

However, there is more to this than meets the eye. The latest computer simulations show that the gravity of the stars cannot explain the misalignment completely. There is much more inquiry into this phenomenon. There are many competing explanations, however, we will have to wait and see what the truth of the matter is.