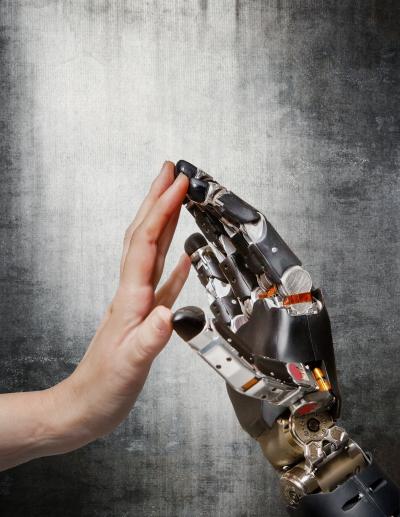 Researchers from MIT have invented a new kind of amputation surgery that can help amputees better control their prosthetic limbs. This should also reduce limb pain. In most cases of amputation, muscle pairs that control the affected joint like elbows or ankles are severed. The research found that if these muscle pairs are reconnected and they retain their normal push-pull relationship, people have better sensory feedback.

An agonist-antagonist muscle pair is one in which muscles alternatively contract and relax, like biceps and triceps. When we bend our elbow, the biceps muscle contracts and the triceps muscle stretches, which sends sensory information to our brain.

During a traditional limb amputation, this muscle movement is restricted. This cuts sensory feedback and makes it harder to feel where the prosthetic limbs are in space.

Shriya Srinivasan, an MIT postdoc and lead author of the study says, “When one muscle contracts, the other one doesn’t have its antagonist activity, so the brain gets confusing signals. Even with state-of-the-art prostheses, people are constantly visually following the prosthesis to try to calibrate their brains to where the device is moving.”

In preclinical studies, the MIT Biomechatronics group invented a new amputation technique that doesn’t harm the relationship between these muscle pairs. Connecting the two ends of the muscle enables the muscles to communicate with each other within the prosthetic limb. In a study involving rats, it was found that when one muscle of the pair was contracted, the other pair would relax and stretch and send sensory information to the brain. This restores sensation for the prosthetic limb.

Srinivasan says, “Both our study and previous studies show that the better patients can dynamically move their muscles, the more control they’re going to have. The better a person can actuate muscles that move their phantom ankle, for example, the better they’re actually able to use their prostheses.”

In the study, 15 patients who received this new kind of surgery called agonist-antagonist myoneural interface (AMI) were able to control their prosthetic limbs more precisely than patients with traditional amputations. These patients also reported that they feel more freedom of movement and lesser limb pain.

“Our study wasn’t specifically designed to achieve this, but it was a sentiment our subjects expressed over and over again. They had a much greater sensation of what their foot actually felt like and how it was moving in space,” Srinivasan says. “It became increasingly apparent that restoring the muscles to their normal physiology had benefits not only for prosthetic control but also for their day-to-day mental well-being.”

The team also invented a modified version of the surgery for those people who have already had a traditional amputation. The process is called “regenerative AMI” and involves grafting small muscle segments to act as the agonist and antagonist muscles for an amputated joint. The team continues to work on developing the AMI process for other kinds of amputations as well.

“We’re learning that this technique of rewiring the limb and using spare parts to reconstruct that limb, is working, and it’s applicable to various parts of the body,” says Hugh Herr, a professor of media arts and sciences, head of the Biomechatronics Group in the Media Lab, and the senior author of the paper.