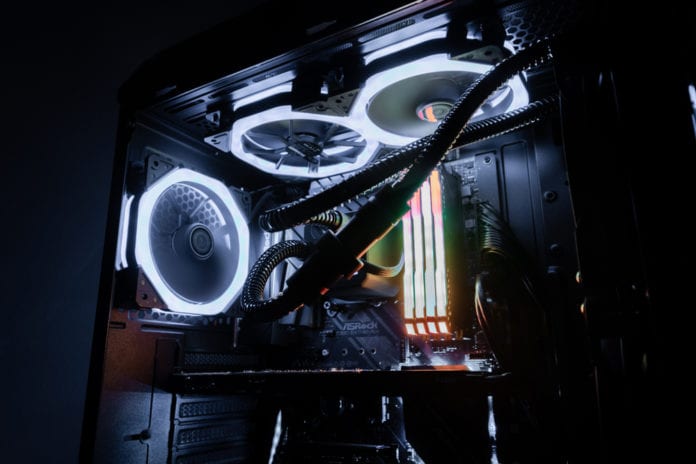 Building a budget gaming PC is quite a tedious task. But here we are, helping you out in building your budget gaming PC that will be able to handle games at low or medium graphics settings while delivering an average frame rate of 30-40fps.

The processor is the heart of any computer, and you need a powerful one for a gaming PC. Well, Ryzen 5 3400G beats Intel in the performance department by a lot. It’s a 4-core, 8-thread second-gen Ryzen CPU based on 12nm Zen+ cores along with Vega 11 graphics (iGPU). It isn’t the cheapest CPU available, but it can deliver a 30-40 FPS range in AAA titles at low to medium settings.

Gigabyte’s 8GB RAM is not a top of the class RAM, but a reasonably priced DDR4 RAM clocked at 2666MHZ. It has a very apt response time which makes it quite suitable for gaming, and it can be seamlessly integrated with an AMD-based system. It comes with a lifetime warranty so that you can game worry-free.

Seagate Barracuda 1TB HDD is one of the most reliable hard drives in the PC market, and I can personally vouch for it as I have used it, and it lasted me for quite a long time, delivering consistent speed over the years.

You can also add an SSD to get more out of the PC after a while, but a hard drive would be more than enough for your system initially.

You would be looking out there for a cool case, but most of the cool looking RGB case’s are on a costlier side. Here we have Corsair Carbide Series SPEC-05 Gaming Case, which is quite cheap and will also satisfy the gamer inside you.

SMPS is one of the most important components of your PC as your whole system would depend on the power supply and needs to be stable. So, it’s advisable to never compromise with the SMPS, or you could lose thousands or lakhs just due to SMPS failures.

But don’t worry! We are here for your rescue. After a bit of research, we’ve come across the Gigabyte P450B 80 Plus Bronze SMPS, which costs just ₹2,689 and is one of the reliable SMPS in the market. It has a 120mm Silent Hydraulic Bearing Fan and comes with three years of warranty.

Here we have covered the essential components that you will need to build a gaming PC under Rs. 30,000 though the prices could vary depending on the seller, it would remain around the Rs. 30,000 mark.