It’s hard to believe that in the last 15 years we’ve had 3 different incarnations of the friendly neighborhood on the big screen. It all started with Sam Raimi’s original film,Spider-Man which, along with X-Men, paved way for a new wave of cinema focusing on superheroes. However, as evidenced by the increasing backlash against the recent outings (The Amazing Spider-Man series), it’s been made clear that audiences want something different while still maintaining the same fun that the original comics had.

Spider-Man: Homecoming, directed by Jon Watts, is the first Spider-Man film to be set in the Marvel Cinematic Universe, starring Tom Holland as Peter Parker, the spectacular friendly neighborhood. Also starring are Jacob Batalon, Laura Harrier, Zendaya, Marisa Tomei and a host of power house actors like Robert Downey Jr. and Michael Keaton. The film follows Peter after his glorious introduction in last year’s Civil War as he goes back to school.

Starting off with a quick introduction to the film’s antagonist, Adrian (Keaton), the film quickly gives us another glimpse at the airport battle during the events of Captain America: Civil War, this time from Peter’s (Holland) perspective. He is quickly dropped off back in Queens and is told he will be called if the “next mission” requires him to do so. Peter spends his days at high school and fighting the everyday petty crime from time to time. While he years for Tony Stark’s (Downey Jr.) aforementioned call, he never receives one, giving him thoughts of whether he is still good enough to be an Avenger, which some might say instills a fear of inferiority complex in him. 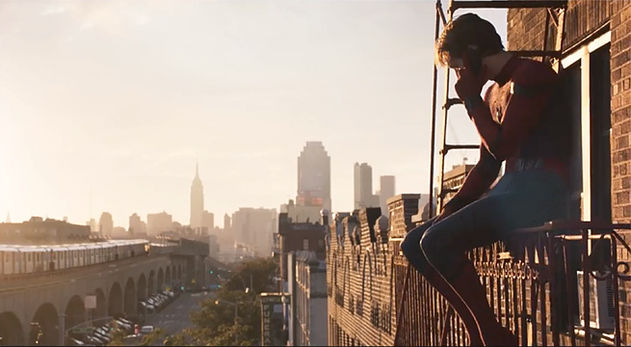 Through his crime fighting he comes across a group of criminals who are using stolen Chitauri (the alien race in the climax of The Avengers) tech for their own nefarious purposes. Peter, the young and naive hero he is, tries to stop this group throughout the course of the film while also manages to make an even bigger mess out of the situation that it already is in. Couple that with all the high school drama that he has to tackle and the result is a fun coming of age story of one getting over their own insecurities and really being the best version of themself.

The first tune that you hear when the film starts is a more updated version of the classic Spider-Man theme song (this one), and this clearly sets up the vision that the film is going to aim for. While in development, the filmmakers made it clear that they were trying to make the movie have a John Hughes vibe. For those of you who don’t know, Hughes was an acclaimed film director famous for doing teen-comedies such as The Breakfast Club, Ferris Bueller’s Day Off and so on. This influence can be easily seen in the final film as Peter continuously struggles with typical teen problems alongside his superhero adventures. Although it must be noted that the comedic nature of the film does not lower any stakes during its more thrilling sequences. 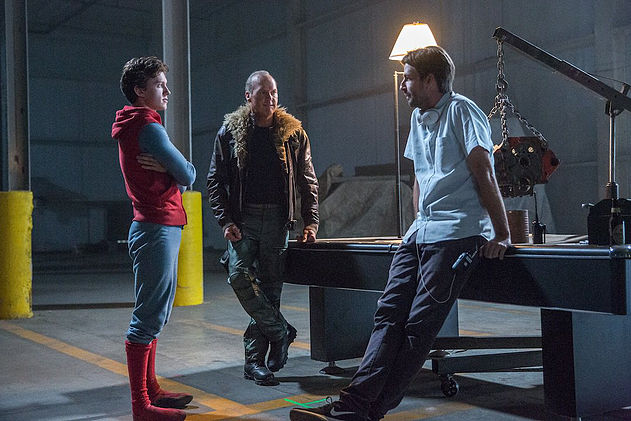 We do get to see Spider-Man indulging in some thrilling action sequences, albeit those having slightly smaller stakes as compared to the adventures of other established superheroes like, say, the Avengers. Trying to take a more ‘grounded’ approach, we get to see him in situations we haven’t seen him in the previous films, like having to traverse to the other side of town when there are no high rise buildings around. Peter discovers that the suit has much higher functionality than what he assumes at first, and in typical fashion, ignores all the safeguards put in by Mr. Stark and activates all of them. This gives his suit a new AI personality à la Jarvis (voiced by Jennifer Connelly). Overwhelmed with these new functions, Peter decides to go after the bad guys himself, determined to prove his worth, which makes for a lot of fun in typical Spider-Man fashion.

Michael Keaton, as the film’s antagonist, gives a worthwhile performance as Adrian Toomes (better known as his alter-ego The Vulture in the comics). We get to see his motivation behind taking up the mantle of a villain and while his transformation from mild-mannered worker to a terrifying villain in a bit too quick, the third act instantly puts him higher than any other baddie Spider-Man has ever faced in his big screen adaptations. To compare, I would put him about as high as Dr. Octopus (from Spider-Man 2). The Vulture has a genuine dread about his look and with the characterization and performance, it’s safe to say that he is one of the more memorable villains that has come out of the MCU, something which sadly cannot be said for most of the antagonists that this sprawling universe has given us. 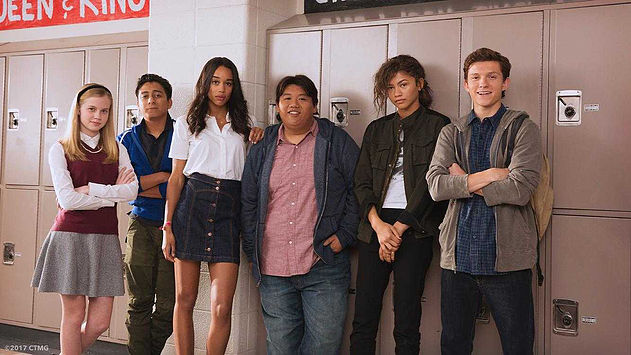 Also supporting Peter (or rather, standing in his way) are his friends from school. Chief among them are Peter’s best friend Ned (Jacob Batalon) and his crush Liz (Laura Harrier). Ned is easily the scene stealer here, largely due Batalon’s amazing chemistry with Holland. Liz meanwhile has a more popular-girl-in-school vibe and Harrier pulls it off quite nicely. However, if there’s one character who has been in the mind of the viewers following the development of the film, it’s Michelle (Zendaya), who as it turns out is playing an original character and not someone from the comics as we know it (thereby squashing all those rumors & theories during production). Marisa Tomei also gives a nice performance as Peter’s aunt May and while many people had been confused since her casting as to whether the film will address this unusual casting choice, fear not as the film gleefully makes many jokes out of it, though never to the point where it may be seen as creepy. 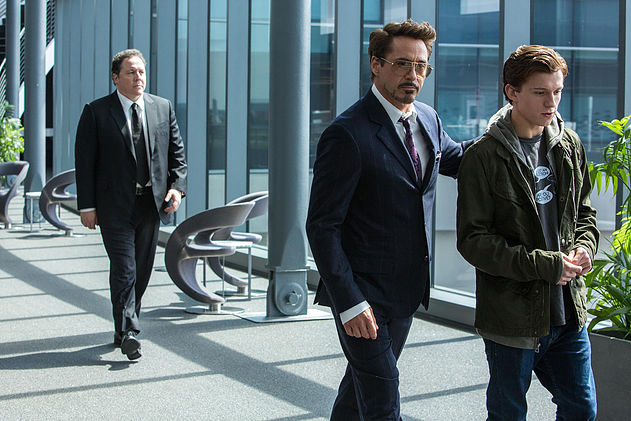 To hammer home the point that this truly is a Spider-Man in the MCU we have Robert Downey Jr. make an appearance as Tony Stark, and while his role isn’t as big or attention grabbing as many people had thought out to be, he certainly plays a big role in shaping up the future of this young hero. By this point it is evidently clear that Iron Man is the poster boy (man?) of the MCU and it’s nice to see him in a more restrained role, props to executives at Marvel who, unlike some other studios, put story first and cash-grabbing next.

It’s clear that Sony made the right call in sharing the character rights with Marvel as this venture has proved to be as successful, if not more, as everyone had hoped it would be. Now only time will tell if the upcoming Venom stand alone will benefit, or at the very least make use of this unprecedented deal. Till then, we cannot wait to see Tom Holland return as everyone’s favorite wall-crawler in next year’s Avengers: Infinity War.

P.S: Just in case you were wondering, there are 2 post credits tags scenes. We highly recommend viewers to not miss them at any cost !