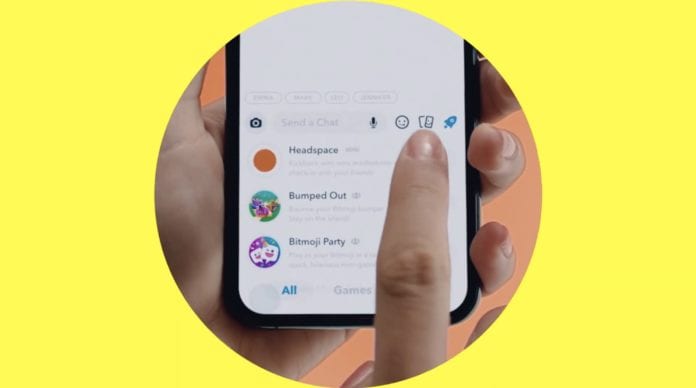 Snapchat has rolled out bite-sized third-party apps which are functional within the app itself. This is Snapchat’s attempt to invite third-party developers to be a part of Snapchat.

These third-party apps are called Minis. Referred to as Snap Minis, these are bite-sized small third-party developed apps that exist inside the app’s chat section. Users can easily connect with their friends and they will not even need to switch apps in between.

Minis are present inside the keyboard tab on the user’s chat screen, the user of the app has to click on it to see the in-built apps in full-screen mode. There are multiple things that the user can do with these apps.

The apps which are in-built will be listed down below at the end of the article. Don’t forget to check that out! Snap Games are games that are present inside the keyboard tab and are built on HTML5. Similarly, Snapchat’s Minis are also built on HTML5.

Snap Kit is Snapchat’s developer platform which enables other apps to come together and join the company’s platform, through which Snapchat can keep rolling out new features now and then. Allowing other third-party apps to integrate will help largely with bringing new features to the app. Minis don’t let the data reach the developers and is just confined and shareable between friends.

There always remains a concern about privacy breaches the moment there is third-party apps integration within the app, there can be such issues as reported earlier with many apps. Right now, there are a handful of third-party apps which are functioning within Snapchat.

Here’s a list of applications which will be released and will be functional from next month onwards: