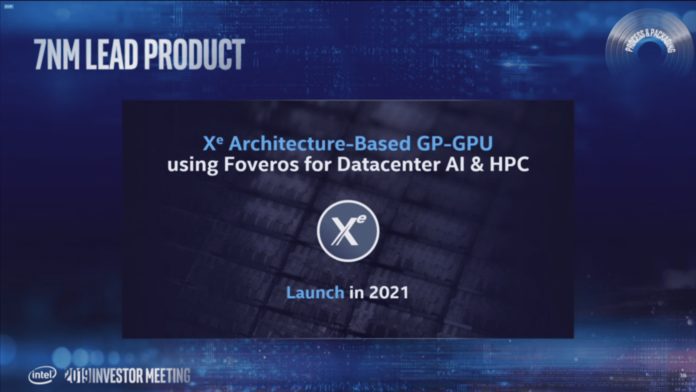 Intel has finally given us a date for the launch of its discrete Xe GPUs, to be based on the 7nm node- 2021. However, don’t get excited just yet, these graphics cards will be for Data Centers, or General Purpose GPU (GPGPU). Intel has also confirmed that similar to the Lakefield SoC, the Xe lineup will leverage 3D stacking of dies which it calls Foveros.

Basically, this means that the memory chips won’t be connected to the GPU via traditional means, and will be stacked on top of it. The HBM memory will be connected to the GPU using one of Intel’s many interconnect technologies, resulting in a smaller but denser GPU. The 7nm Xe chips will be optimized for the Data Center space aimed at AI-based inference and HPC workloads.

If you are a gamer though, fret not, the Xe graphics cards for the gamers and enthusiasts are expected to land by the third quarter of 2020. However, these will be based on the 10nm process, instead of the abovementioned 7nm.

10nm Intel Icelake CPUs in June for Laptops, Q4 for Desktops, 2020 for Xeon

Intel has finally shown all its cards, and it seems like its 10nm struggles aren’t as bad as we had expected. The mobile Icelake chips are going to ship this June while the desktop class processors will land in Q4. The Xeon server chips based on the new node are planned for an early 2020 launch. Intel is making sure that everyone realizes that the “four long years of work” on the 10nm node has finally paid off and we can expect some serious performance upgrades over the present 14nm++(++) process. The core being:

As reported multiple times, the 10nm Ice Lake architecture will first be available for the mobile and Lakefield (SoC) platforms. However, by the end of 2019, we should see desktop grade 10nm parts and in the first quarter of 2020 server and Data Center products.

It seems like Intel is going to stick to the 7nm node for quite a bit, three years as per their roadmap, but then again we were supposed to see their 10nm chips 4 years back and they’re still not here. Anyway, the 7nm process set to release in 2021 is promising some lofty optimizations:

There was also mention of future iterations of the Foveros and EMIB packaging that might as well be the future of the semiconductor industry as silicon miniaturization has started to hit its limits and Moore’s law is long dead.