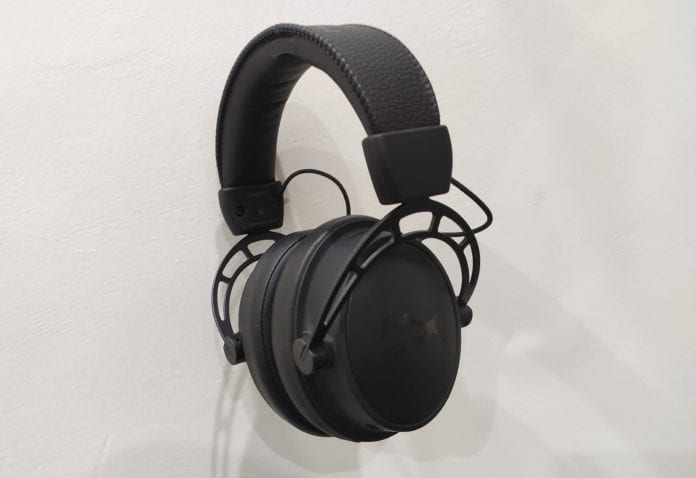 Having just recently reviewed the HyperX Cloud Stinger Core Wireless 7.1 Gaming headset and being thoroughly impressed, I was really excited to get my hands on the new Cloud Alpha S.

After having used this gaming headset for a couple of weeks, I’ll be sharing my thoughts and mentioning the merits and demerits of this headset.

To start off, I want to point out one thing, the moment you take this headset out of packaging, you’ll realize how good it looks. I have the Blackout version with a completely black colored chassis and it’s easily one of the best looking headset I’ve used. Then again, this is subjective and up to personal taste, but I really can’t imagine anyone not liking the aesthetics of this headset.

The headset weigh around 310 grams, which is not particularly light, owing to its metal frame and hinges. But nonetheless, it has a very premium solid built and feels sturdy in hands. The ear cups feature soft memory foam padding with a leathery finish. There’s also an extra set of fabric-covered ear pads, which are more breathable than the leather ones but produce less bass. The headset is comfortable to wear despite its weight and provides a secure and snug fit. This headset can easily be wore for those long gaming sessions without it being uncomfortable at any point.

There’s a very subtle HyperX logo on each ear cup which also feature three-way sliding adjustable bass switches, to control the bass. The bottom of the left ear cup houses two connectors, one for the detachable microphone and the other for 3.5mm cable.

You can connect this headset using either a 3.5mm jack or through USB. Connecting through 3.5mm jack might be useful for users looking to use this with their mobile devices or consoles, but you won’t get the 7.1 virtual surround sound. For the virtual 7.1 surround sound, the headset needs to be connected to a USB slot via the USB Control Mixer. The headset comes with thick braided wires which seem sturdy and are long enough for any average user.

The detachable microphone deliver clear, noise-free voice. Although not good enough for recording or streaming, it’ll satisfy most users looking for casual voice-chats on Discord or Zoom etc. The microphone has an adjustable arm which can be used to position the mic.

Now coming to the sound performance, it’s just as I expected it to be, it sounds amazing. It uses Dual Chamber Drivers for the separation of mid and high frequencies from the bass, which allows for a distortion free sound, even at high volumes. The sound without the virtual 7.1 surround is pretty good but nothing special, especially at this price. It’s when you turn the 7.1 surround sound on, when it starts justifying its price.

Gaming with these headphones is just astounding, the whole experience becomes way more immersive and can really give you an edge when it comes to competitive gaming. The sense of location you get while gaming with this headset is just amazing. And it’s not just gaming, watching movies or listening to music with it is also a delight.

The bass on this headset can be adjusted using two three-way sliding switches on either ear cup. Keeping the slider fully open will give you the most bass, while keeping it completely close will make the sound less punchy. All in all, if you buy this headset, you can rest assured that sound performance is never going to be the reason you’d ever regret your purchase.

The USB control mixer houses six buttons with the most prominent button in the center that can be used to toggle virtual 7.1 surround sound.  There’s a button for turning the mic on or off on the side. Then there are 4 buttons around the surround toggle, two for increasing or decreasing the system volume and the other two for adjusting the Game-Chat balance. What this means is that you can control whether you’d want the game sounds or the voice chat to be louder than the other, and this can be done and adjusted anytime from the mixer itself with the help of audio cues it produces while you’re trying to find the correct balance. It’s a pretty neat feature and works like a charm.

Now let’s move on to some things I think could have been better.

One major let down was the lack of the provision for adjusting the EQ. For a wired headset that costs as much as this, the user would surely appreciate a little control over the sound profile they’re getting out of it. Don’t get me wrong, the tuning done on this headset is great, and they’ll sound amazing to almost every user, but for that minority of users who prefer a very specific and unique sound stage, an adjustable EQ would’ve been a great addition.

The HyperX’s NGENUITY software is still where a lot of work can be done. As I just mentioned, the lack of an adjustable EQ makes the whole software kind of redundant. Most of the things you’d do using the software can be easily done using just the USB control mixer.

Another thing that bothered me was the lack of in-line controls for the 3.5mm connection. Even if I completely ignore the fact that you can’t use virtual 7.1 surround with 3.5mm jack, the lack of even volume controls is a bit inconvenient, especially for users looking to use it with their consoles. Moving the volume control buttons from the USB control mixer to the bottom of the completely empty right ear cup would have made more sense in my opinion.

The most basic and the most important aspect we look for in a headset is its sound performance, and the HyperX Cloud Alpha S excels in that. When it comes to headsets, everything else is secondary.

It’s not a cheap headset by any means, but the sound quality and some of its extra features truly justify the price. The shortcomings with this headset are not major and will only affect a very small percentage of potential customers.

To conclude, it’s a well built, good looking and an amazingly sounding headset. So, if you’re in the market for a solid gaming headset and sound performance is of the utmost importance to you, the Cloud Alpha S should definitely be considered.

Buy it for the sound, rest all is just bonus.

Buy it from Amazon : Blackout , Blue