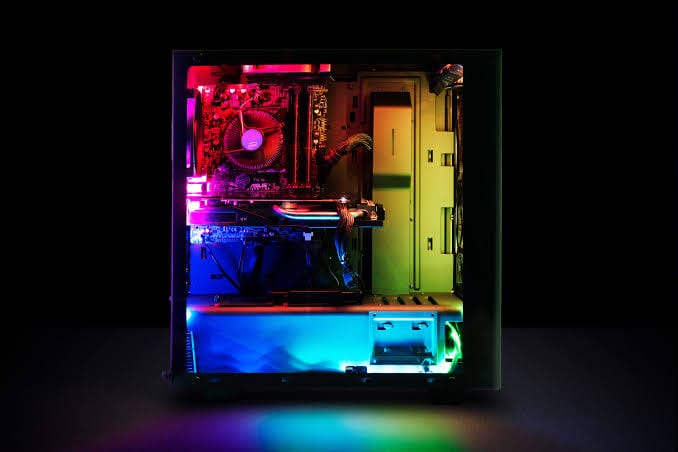 If you’re looking for a flagship PC for 4K gaming, now’s a great time. With NVIDIA announcing their Ampere Lineup, and AMD Big Navi right around the corner, there are a ton of options to choose from. For the build, I’ve stuck to approximate pricing of components as they tend to vary frequently. The following build will be future proof for gaming at 4K 60 FPS for the foreseeable future. So let’s get started!

The Ryzen 7 3700X is a great processor to pair with a high-end GPU. As most of the heavy lifting is done by the GPU itself, one can get away with a much lower. Since the Ampere cards are not yet out for benchmarks, let’s compare the Turing equivalent 2080Ti for the processor. The bottleneck delta observed was around 5% which is negligible in real-world performance. Also, the 3700X has a great overclocking potential which makes it on par with its elder sibling – Ryzen 7 3800X at a lower price and much lower TDP (3800X – 105W).

The GeForce RTX 3070 is a no brainer for this segment courtesy of NVIDIA undercutting the RTX 2080Ti with a huge margin in terms of price. The RTX 3070 is priced at less than half the price of RTX 2080Ti and NVIDIA claims that the GPU will deliver better performance when compared to RTX 2080Ti. We’ll know that once the card hits the shelves next month. In terms of specifications, the 3070 triumphs over the 2080Ti except for its lower bus width (352 bit – RTX 2080 Ti) and lower memory by 3 GB. If you’re not in a hurry, you might want to hold on for AMD’s Big Navi reveal for the AMD counterpart.

The Deepcool GamerStorm Maelstrom features dual-fan radiators with 240mm fans which should easily handle the 3700X. The low price tag, RGB, and low noise profile make it easy to recommend.

The ASUS TUF X570 Plus is a great fit for the Ryzen 7 3700X. The motherboard boasts Aura Sync RGB lighting for easy RGB controls. With the Realtek S1200A codec, the board supports stereo audio out of 108dB SNR. Furthermore, in-built wifi is a cherry on top. For an X570 Board, it is fairly priced and offers good support for overclocking.

RAM is an essential part of any build and choosing the right one is a tricky task. The Corsair Vengeance LPX offers a frequency of 3000 MHz in the DDR4 socket. Although the Ryzen 7 3700X supports RAM speeds of up to 3200 MHz, 200 MHz higher speed certainly does not add much to the real-world performance and quickly turns into diminishing returns. You might want to pick that variant if it fits your budget.

This segment depends on personal preference and might vary from person to person. The Crucial P1 NVME is a blazing fast SSD with an M.2 form factor. When paired with the Western Digital WD10EZEX 1TB, they work harmoniously. If your budget permits, you might want to take advantage of dual M.2 slots in the ASUS TUF X570 Plus board and create a RAID setup for even faster speeds.

Investing a good amount in power supply should never be a question. A bad PSU can damage the entire system, thus you might want to spare around Rs. 10K for the power supply. The Corsair CX750 is a 750W power supply with 80 Plus Bronze certification. Since NVIDIA’s upcoming Ampere cards have a recommended power spec of 650W, the CX750 is well above the requirement and is a sensible option. Given Corsair’s reputation, the PSU should keep your system safe at a reasonable price compared to its competitors.

This strictly depends on personal choice and varies from person to person. For this build, I’ve chosen the Deepcool Macube 550 WH case for a minimalistic design and aesthetic dragon vents on the side. The case features a sleek-looking box finish with a tempered glass side. As far as the build is concerned, any full tower case (with support for ATX) should do the job.