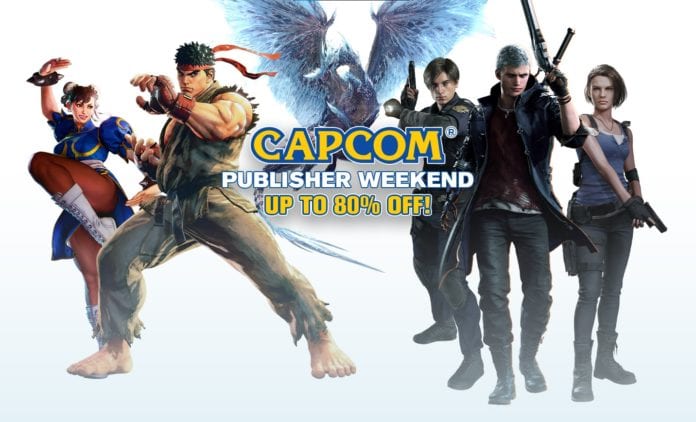 With Resident Evil Village releasing soon, Capcom is hosting a grand Steam sale, with many games from its notable franchises on sale. Here are the top Capcom games on discount right now:

Now is the perfect time to pick up Resident Evil 7 if you’ve never played it. The game follows Ethan Winters, a new protagonist for the franchise as he explores an old house in search of his missing wife. RE7 introduced first person gameplay for the first time in the franchise, which by all accounts was a great choice for horror.

Resident Evil 2 was one of Capcom’s first remakes for the PS4/Xbox One generation, taking a classic game and updating it with modern graphics, resulting in a pretty slick game. RE2 is a third-person game set mostly within & around the Racoon City Police Department.

We loved what Capcom did with the game on the new RE Engine, which upped the game’s visuals all at a smooth 60 FPS on consoles! Here’s what we had to say about RE2 in our review–

“If you are a fan of the genre or the franchise and look exploring the gloomy environments hunting for weapons and ammo all the while solving some rather frustrating puzzles, then don’t even think. Just buy it, you’ll love the game.”

Devil May Cry 5 was the triumphant return that the franchise deserved. It instantly wiped off our sour memories of the reboot, and once again reminded us why we fell in love with the series in the first place – with heart-pumping action, tongue-in-cheek writing, great visuals and best of all 60 FPS on consoles. Check out what we had to say in our review of the DMC 5-

Devil May Cry 5 marks two years of continuous success for Capcom which began with Resident Evil VII and has carried on through the battles of Monster Hunter World and the zombie-infested streets of Racoon City and now finally DmC 5.

The remake of Resident Evil 3 may not have been as well-received as RE2, but that doesn’t make the game any less fun. Our only complaint of the game at launch was its high asking price, and with it now on sale, it’s a great time to jump back into the dark corridors of RCPD. Check out what we had to say in our review of the RE3-

“Everything from the characters to the visuals, the atmosphere and the addictive gameplay loop here reflect the original game’s big ambitions.”

Monster Hunter World brought the franchise to western audiences and enjoyed newfound success with a lot of new gamers. The game has a beautiful open world ripe for exploration with friends (or alone, if you’d like). If you like games with a rich RPG progression and loot, especially with silky smooth framerates thanks to NVIDIA DLSS, then Monster Hunter world is for you.

Ah, Dragon’s Dogma. A franchise that never got nearly the amount of love it deserved. We’ve previously described Dragon’s Dogma as Capcom’s attempt at replicating Skyrim, and while the final experience is a little lacking, it’s still quite unique. To get an idea of the world of Dragon’s Dogma, you might want to check out the Netflix anime series.

The Capcom sale on Steam will run throughout this weekend, and you can check out more games from the publisher on Steam.