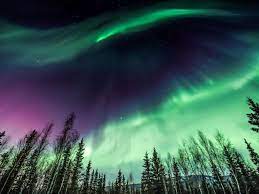 Aurora, also popularly known as polar light (Aurora Polaris), is a natural phenomenon that consists of colourful lights flashing in the sky. These are only visible at night near the polar ends (around the Arctic and Antarctic). There are two kinds of these lights; namely Aurora Borealis (North pole) and Aurora Australis (South pole).

Although seen during the nighttime, an aurora is actually caused by the Sun. The particles (ions) of the sun are constantly streaming out and being converted into solar winds. When they clash with the earth’s magnetic field, they create a disturbance resulting in Aurora. If it weren’t for the magnetosphere, the entire life on Earth would have been erased by the harmful energies of the sun and one could never witness these beautiful lights (either way).

Auroras take place 60 to 620 miles above the surface and are visible to the naked eye. The lights have been noticed in various colours depending on the gas emitted by the electrons. It is called ‘Spectrum’. The yellowish or green lights (most common) are produced by oxygen. Sometimes, they can even be red or pink. Nitrogen, on the contrary, gives off a bluish-violet colour. Orange and white are very rarely seen.

According to the people who have observed this, aurora also gives out distant sputtering noises on the ground. The particles release X-ray and radio emissions known as Auroral Kilometric Radiation which is only noticeable from space due to the ionospheric absorptions. They do not pose any harm to human life but their charged particles can affect ground infrastructure and technology.

They can take various forms such as arcs, soft flowy curtains, patches, or bands. The most commonly found form is the uniform arc. The lights tend to keep changing too. Sometimes, the speed of motion is very high. Mostly, the difference in said speeds is quite negligible to us. The best time to watch them is during the winters or from December to March. The darker and colder nights help in their formation more so than the summer sun.

Some of the places to witness the same include northern Norway, Scotland, northern parts of Canada, Finland, Sweden, the southern half of Greenland, Alaska, and Iceland being the most famous of them all. It should be noted that Earth isn’t the only planet to experience Auroras. Jupiter, Saturn, Uranus, Neptune, and most natural satellites or even comets also have a similar occurrence.

As we know by now, Auroral lights have highly charged particles in them which have proven to be good sources of electricity. Down below is a conversation that took place between two operators of the American Telegraph Line from Boston to Portland highlighting the potential behind these lights as an electricity source:

Boston operator (to Portland operator): “Please cut off your battery [power source] entirely for fifteen minutes.”
Portland operator: “Will do so. It is now disconnected.”
Boston: “Mine is disconnected, and we are working with the auroral current. How do you receive my writing?”
Portland: “Better than with our batteries on. – Current comes and goes gradually.”
Boston: “My current is very strong at times, and we can work better without the batteries, as the aurora seems to neutralize and augment our batteries alternately, making current too strong at times for our relay magnets. Suppose we work without batteries while we are affected by this trouble.”
Portland: “Very well. Shall I go ahead with business?”
Boston: “Yes. Go ahead.”

It was the first time ever that a telegraph conversation went on for a couple of hours solely on the energy produced by aurora without any power backup. Hence, drawing a conclusion that northern lights are made up of electric matter. To get further insight, read this.

A new experiment held in a lab at the LPD in UCLA’s Basic Plasma Science Facility revealed the origin of aurora. The lights along with the magnetic field were recreated and scientists studied the ions travelling in the waves. For a deeper dive, click on the link here.