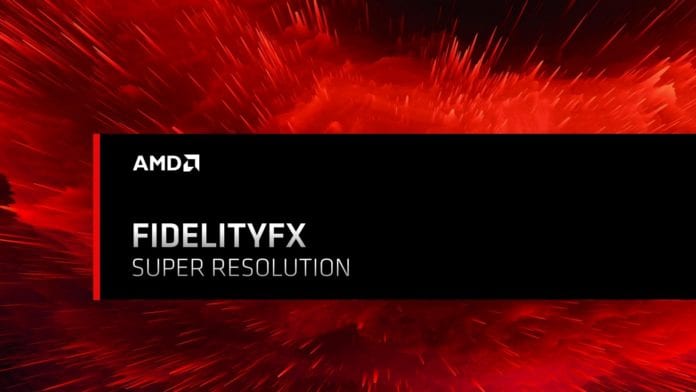 Much has been said about AMD’s new FidelityFX Super Resolution technology, or FSR, regarding how it’ll usher in a new era of performance for budget gamers. Now that Super Resolution is finally out, it’s time to test whether it really stands up to giants like NVIDIA’s DLSS, or if that comparison is even fair. To that end, we tested FSR in multiple games that are supporting it at launch, and the results are quite impressive.

What is FSR, and Why Should You Care?

Let’s backtrack a bit before we dive further. What even is FSR, and why should you care? Well, in the simplest terms, FidelityFx Super Resolution is a new image upscaling technique developed by AMD to be used across a wide range of graphics hardware, including NVIDIA’s GPUs. FSR is not a DLSS alternative, but it does try to tackle similar problems. We went deeper into how FidelityFx Super Resolution works earlier, but here’s a small recap:

AMD’s FSR is done in 2 passes – an anti-aliased image with tone mapping is needed as a base on top of which the upscaling and sharpening passes occur. Post-process effects like film grain are added on top of this resulting image, with the game HUD coming in last.

In contrast, NVIDIA’s DLSS is an image reconstruction technique, which is different from upscaling. Both DLSS and checkerboard rendering (popular in the console space), use information from parts of an image to create a whole new one using smart techniques. FSR works differently, in that, a baseline image is already required and then upscaled. But all that may be redundant as FSR’s biggest pro is that it’s open-source. This means that, unlike DLSS, AMD’s tech doesn’t require specific hardware that is only available on new GPUs, and that’s what matters here. We’ve tested the technology on both NVIDIA and AMD GPUs and it works without hitches.

Let’s take a look at the following images from Godfall and Terminator Resistance, both of which support FSR. You can click on each image and view them in their full resolution in a new tab.

In our testing, we found that the Ultra Quality and Quality modes look virtually identical to the native resolution at 4K. Of course, zooming in by a factor of 2-3X will show differences, but those depend on the game also. Performance mode when playing at 4K will look slightly blurry, but not too much to be a distraction. The performance improvement there is extremely high, and is enough to turn your 1440p targeted gaming card to a 4K one!

AS can be glimpsed from the benchmarks above, the 5 different modes of FSR offer the following amount of performance uplift at 4K:

Of course, these numbers aren’t going to be the same for every game that uses Super Resolution, as developers have a good amount of control over the factors that go into it. On topic of performance, one thing to note is that we haven’t included performance results at 1440p, and that is because, since the internal resolution is right below 1080p for them, game performance gets bottlenecked by the CPU in our tests. AMD backs this up in their briefing material, adding the following regarding lack of performance improvement at certain resolutions as –

“If the predominant bottleneck in the gaming scenario you are testing occurs in some other stage of the render process – in processing the scene geometry, for example, or in some game process or driver process that is executing on the CPU – then FSR is unlikely to produce any useful benefit to fps.”

Using the upscaler at 1080p is not recommended, and if you are going to use it for improved performance, then we recommend using the “Ultra Quality” mode. Anything below that generally looks extremely blurry, which makes sense since the base image is around 540p at that point.

At 1440p, things start to look a little worse for team red. A lot of fine-grain image details start to disappear when using performance mode in 1440p, but if you’re playing on a 1080p monitor, you might not notice that too much.

FidelityFX Super Resolution shows a lot of promise, and AMD has said that they are working on improving it. While image quality does take a visible hit to quality with FSR turned on, the performance gains are significant enough that gamers on older graphics cards may not find that too distracting. After all, the ones most benefiting from this feature may already be playing at 1080p either way. The worst thing about FSR right now is the supported games list. That is showing some promises of getting better, with Resident Evil Village and Far Cry 6 adding in support for it soon. For now, budget gamers can rejoice in having a seemingly free upgrade.