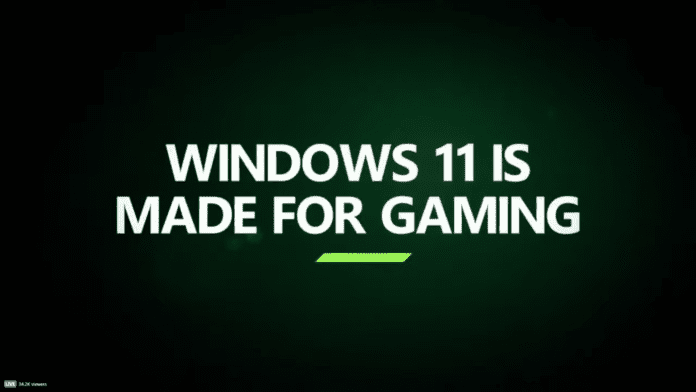 It has been no secret throughout the years that Microsoft as a company holds a vested interest in the industry of gaming. What does Windows 11 have in store for gamers worldwide?

Tons of new features are being introduced to improve the quality of life in a gaming experience. As Sarah Bond, CVP, Game Creator Experience and Ecosystem of Microsoft explains in this blog, some of the best features that people could experience on the Xbox series X and S are now possible to be experienced on PC. Let’s take a look at them.

A feature that delighted players worldwide on the Xbox Series X/S is coming to the PC via Windows 11. It will now be possible to experience the full power of HDR on a computer. Auto HDR or High Dynamic Range adds a “much wider range of brightness values and colours, giving an extra sense of richness and depth to the image”.

As it was demonstrated on Bethesda’s classic Skyrim, the continent of Tamriel has never looked so great. The grass looks greener, the mountains look sharper and the world is just a touch brighter, giving it a much cleaner look.

Auto HDR will work on systems and games that were built on the DirectX 11 or higher framework and will be available to all systems running Windows 11.

Another revolutionary technology first introduced on the Xbox series X/S, DirectStorage is a gamechanger in terms of game running and loading speeds. It was featured as part of the Xbox Velocity Architecture.

Using DirectStorage, people can directly render assets through the graphics card without bogging down or using the CPU much. This leaves a lot of space for the background as well as Parallel tasking, as well as running games at an unprecedented speed.

This was the feature that set the Xbox series S/S apart on release vs the PS5. The lightning-fast load and boot times, as well as the instant application switching, were absolute game-changers as features at the point. This makes DirectStorage a must-have on a PC, which is what Windows 11 gives you.

Microsoft also claims to have “the broadest hardware support in the world”, and they are not wrong. On your PC right now, you can connect everything from a 95 era keyboard to a VR headset, a feature that will just get better with Windows 11.

Just some of the peripherals that Windows 11 will support-

Xbox Game Pass Gets a Boost

The Xbox and the PC have a huge game library, and Microsoft has been constantly expanding it, including recent deals with companies like Bethesda and holding exclusive rights to their games.

The PC and Xbox both also feature a game pass, using which you can play a multitude of games, just by paying a small monthly charge. Whether it is a AAA classic like Rocket League or an indie masterpiece like Undertale, they are all on the table to be available in the Game Pass.

In Microsoft’s own words, “Game Pass for PC includes PC games from Xbox Game Studios and Bethesda the day they launch, an EA Play membership at no additional cost with Game Pass for PC or Ultimate”, and that is apart from all the games.

Since Xbox has crossplay with PC, that is also something unique about the game pass. Also, with the help of Cloud Gaming, you can experience all these games without even owning a gaming PC, on your standard hardware. What’s not to like?

Windows 11 looks to be making waves in the gaming industry even before its release. Its true impact will only be felt after the release of the operating system, and we can’t wait to find out how it changes the industry.