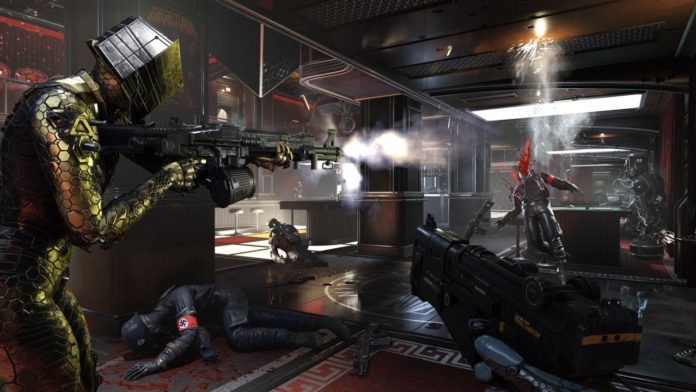 Wolfenstein: Youngblood got a lot of flack, especially from the fans of the franchise. I’ve myself never played a Wolfenstein game in my life, and honestly it was through NVIDIA’s vigorous marketing of the RTX titles that I got to know about this one. Unfortunately for me, the RTX implementation got delayed, leaving me to review this Nazi killing simulator instead of the ray-tracing effects. I was wary from the very beginning as most of the reviewers weren’t impressed by the game, with some of them calling it rubbish right off the bat. However, surprisingly, the initial experience was very pleasant in my case. The co-op element of the game makes the massacres more entertaining and I’d recommend playing it with a friend or some random internet stranger, rather than solo, as the AI is horrendous.

There’s not a whole lot of focus on story and the characters here (as expected). The thin and thick of it is that BJ, the protagonist of Colossus has gone missing and no one seems to be looking for him. So, the two Blazkowicz sisters with some help run off to France hoping to find daddy dearest, and in the process liberate the city from the Nazis. Armed with power armors and a dozen deadly customizable weapons, this little shoot em’ up adventure is vastly different from the original games.

As for the two sisters themselves, they aren’t that interesting to begin with. Just your run-of-the-mill edgy teenagers with a wide array of killing machines, obsessed with spy-boy novels. Although they have been trained to defend themselves with both hands and guns, this is their first trip away from home without mommy and daddy. This becomes apparent when the girls kill their first Nazi but henceforth behave like they’ve been in the murdering business for years.

The first few hours are pretty fun, packed with ample killing sprees and fast-paced action and having another human companion with you on the ride makes it even better. However, there’s one aspect of this game that is so painfully obvious that even the least observant players will find it hard to ignore: IT IS SO DAMN REPETITIVE!

And I seriously mean it. Kill a hundred Nazis and enter a building. Loot the crap out of it, and then pop back out, planning your next stop only to find that all of them have respawned. Repeat the exact same thing you did literally minutes ago, only to find out that you’ve to go back into the complex. And guess what? Yes, these guys have also magically come back to life. Kill another hundred Nazis and backtrack to your starting position, killing the same bunch of soldiers a few dozen times. You’ll be forced to do this multiple times every single play session. At first, it’s not really a bother, but after a while, it starts getting on your nerves. Basically, the respawn mechanics are messed up to the point of being an annoyance.

Another bizarre addition to this spin-off is the inclusion of many deep-set RPG mechanics. Yes, in a Wolfenstein game. All the weapons and skills are highly upgradable with an option to improve them even further. Although this makes the several dozen side quests relevant, in the long run, it doesn’t make the repetitive gameplay more enjoyable.

As already mentioned, Wolfenstein: Youngblood was supposed to launch with ray-tracing support but for whatever reason, it has been delayed. Despite that, the PC port like most Bethesda games is well developed. It includes support for NVIDIA adaptive shading, Asynchronous Compute, a slew of anti-aliasing techniques for different graphics elements, upscaling, volumetric lighting, detailed shadows, etc.

The soundtrack although nothing special keeps the momentum going. We’re talking about regular metal/rock music present in most modernday shooters. It’s not quite on par with the Doom soundtrack but gets a passing score.

At first sight, Wolfenstein: Youngblood seems like a decent title but as the novelty wears off and the monotonous level design drags on, you feel stuck in a perpetual loop that ends in a boss fight, each with a slightly different foe. The enemy types aren’t really diverse, they just get bigger in size and more often than not feel like bullet sponges.

The coop aspect of the game is a redeeming feature adding some depth to an otherwise uneventful experience. Still, there’s only so much entertainment you can extract from a cliched, fast-paced shooter, but the $30 price tag does help justify the lack of content.