Search
Home News The Future of Apple With Intel And Why Their 15-Year-Old Partnership Is...
Facebook
Twitter
WhatsApp 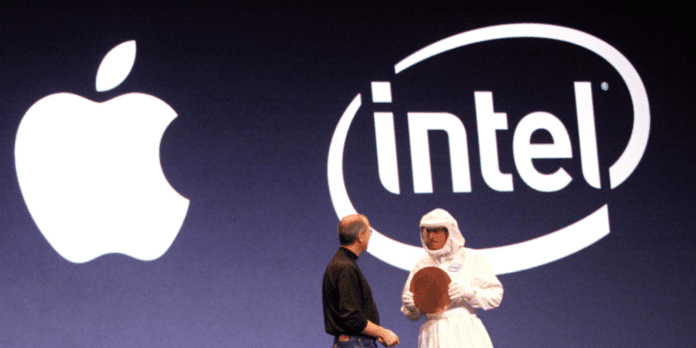 Apple’s transition from Intel’s Core processors to their own ARM-based Apple Silicon has brought in a major change in the PC market. Now, Intel doesn’t just face the ground reality of where it stands against the likes of AMD, but also companies like Apple and Qualcomm.

Intel has failed to move ahead of their 14nm manufacturing process, making them the only major chip manufacturer currently mass-producing desktop processors on that architecture. Not only does that come as a liability to their 15-year-old partnership with Apple.

The ending of their long-lived relationship not only means that Apple is completely eliminating the use of Intel chips after 2022 but also the fact that Intel will have no other option but to adopt a smaller manufacturing process to cope with the industry.

When we talk about Intel and Apple’s inevitable breakup, the major contributor to this partition would be Apple’s (very successful) attempt at making their own desktop processors.

This is not the first time that Apple has dug its hands deep into a line of ARM processors as it already has its own line of A-series mobile chips that are used in the iPhone as well as the iPad.

The future of the M series Apple Silicon processors is a mean machine in the making which reports have also suggested may come with up to 32 cores and a dedicated GPU with up to 128 cores.

The future of Intel with Apple

To sum it all up, with the success of Apple’s own line of Apple Silicon desktop processors, Apple has moved way ahead in terms of using 14nm chips in their Macs. Intel may continue to provide network chips to Apple for a while as reports suggest Apple might switch to its own 5G modem chips by 2023.

Apple’s desire to completely control the hardware and software side of their devices comes into play when we talk about their collaboration with other companies. Even if Intel was not at fault (which they were), they would have been sidelined to make way for the M-series chipsets anyway. Thus, the end of this partnership was inevitable.

Where things go for Apple

The future is bright for Apple, very bright indeed. Apple posted a March quarter record revenue of $89.6 billion, up 54% from last year. This comes in after the release of Apple’s very own lineup of refreshed MacBooks featuring the Apple Silicon M1.

With Apple’s WWDC event coming up, it is set to unveil the updated M series chipsets which may be called the M2. A Mac Pro is also in the works with a monster 32 core M series processor as well. Stay tuned for more updates on Apple’s M lineup of desktop processors.