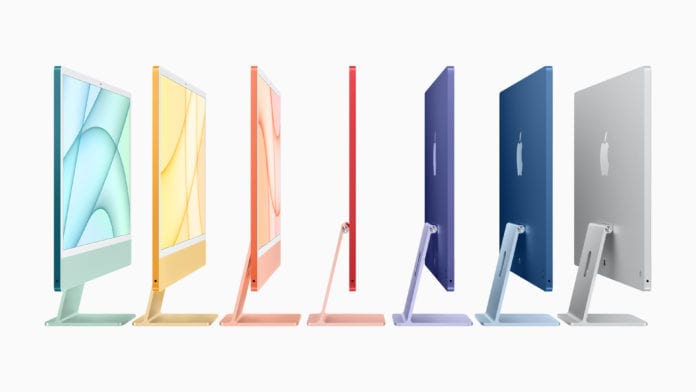 Today, Apple unloaded a bunch of new devices at its Spring Loaded event, and we’ve got our spring surprise, the much-awaited redesigned iMac. So, the new iMac comes with Apple Silicon, a new cooling system, a 4.5K Retina Display and the “best-ever camera on a Mac.” The M1-powered iMacs come in seven new colours inspired by 1998’s G3 Cube.

The new iMacs are not only colourful, but they are now even slimmer, measuring just 11.3mm. The new iMac features a 24-inch 4.5K retina display with narrower bezels than its predecessor. The display supports the P3 colour gamut, True Tone technology and has a brightness of 500-nits with a coating for lower reflectivity. Moreover, the front is covered with a single sheet of glass though it still has a huge chin at the bottom.

Despite being on the thinner side, the redesigned iMacs will be quieter and cooler than the previous intel based models, thanks to the M1 Chip. Cupertino giant has replaced the “bulky thermal system” with “two small fans.” The “two small fans” has a 10db of maximum volume, which keeps it quiet even during high pressure.

Finally, after years of wait, Apple has upgraded the camera on the Mac lineup. The redesigned iMac features a larger sensor with 1080P resolution – a first for Mac. The upgrade is not limited just to the cameras; the Cupertino giant has also reworked the microphones on the iMac. The new iMac comes with studio-quality mics and an array of six speakers.

We’re yet to get the new Apple Silicon, but the Apple M1 on the redesigned iMac is bonkers. The M1 on the new iMac is touted to be 85% faster than the previous Intel-powered iMac. According to Apple, it offers up to 2X GPU performance for the select applications, and it is said to be 50% faster than the discrete graphics in the top-end 21.5-inch iMac. It also offers 3X improvement in machine learning performance thanks to the 16-core neural engine on the M1 Chip.

The new iMac bids adieu to the USB A ports. Now it has four USB-C ports at the back, including two Thunderbolt 4 ports. The power adapter is also redesigned. It can be connected magnetically; it also has an ethernet port that can deliver speeds up to 1Gbps.

The new iMac comes with a bunch of new and colourful accessories. The Magic Keyboard now has three options to choose from – with new keys, with TouchID, or TouchID with a numeric keypad. The Magic Mouse and Magic Trackpad will also be available in new colours matching the new iMac colours – green, yellow, orange, pink, purple, blue, and silver.

The redesigned iMacs will be available to order starting Friday, April 30, with delivery scheduled for the second half of May. The base configuration with 7-core GPU and 256GB SSD will be retailing for ₹1,19,900/$1,299; meanwhile, the 8-core GPU model with two more ports will be available for ₹139900/$1,499.