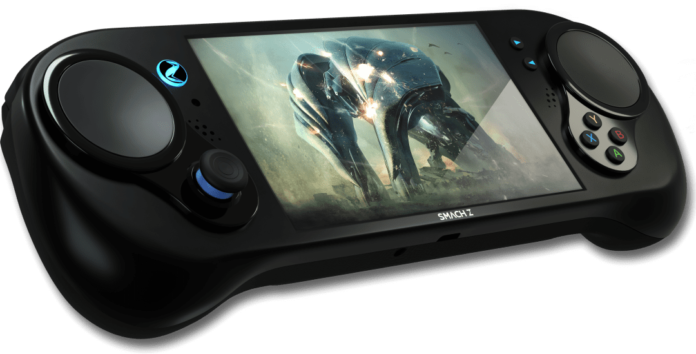 Ah, the SMACH Z. The term “vaporware” is used to refer to games that are announced, generate immense hype, then disappear (poof) into a cloud of vapor, never to be heard of for a decade or more. I have no idea what they call the hardware equivalent of that, but whatever that is, the SMACH Z is definitely it. Yes, that AMD Ryzen-Radeon powered handheld console that promises PC level performance.

The elevator pitch is exciting enough: Real PC gaming (without any cloud shenanigans) in the palm of your hands, powered by meaty laptop-class hardware. This has always been something of a pipedream. While the GPDWin has had limited success, the only mobile device with dedicated graphics hardware that actually made it to the market was Razer’s Edge gaming tablet. That particular unit had an outrageous price-tag and a GT 640M LE that was just about powerful enough to run most 7th gen titles at reasonable settings. The high cost and the sheer -ness ensured that it never made a big splash in mainstream circles.

The SMACH Z is supposed to much more affordable and more powerful. And the recent unveiling of an enhanced SMACH Z design at Gamescom makes it an even more interesting proposition.

The newest SMACH Z design features an AMD Ryzen V1807B embedded SoC. This is a serious piece of hardware. It features a quad-core/eight-thread CPU that runs at up to 3.35 GHz, with a base clock of 2 GHz. It also features a Vega 11 GPU. This is, in essence, the same combination seen in the well-received Ryzen 5 2400G APU. While thermals might limit performance to a certain extent, this part is the most likely point of comparison for the new SMACH Z and we have to say, it’s pretty damn impressive for mobile hardware. For starters, it’s a noticeable step up from the likes of the Nintendo Switch. At 1.76 TFLOPs, the GPU is actually faster than the Xbox One S’s, snapping on the heels of the base PS4, all the while paired with a substantially faster CPU. That kind of power would make 720p gaming at console settings completely possible, even in 2019 AAA titles.

If the SMACH Z actually comes out this year, (and if it indeed does feature this SoC), it’d be a mighty impressive piece of hardware. But, honestly, we’re not holding our breath. I’ve heard about the SMACH Z for years. I’ll believe it when I see it.