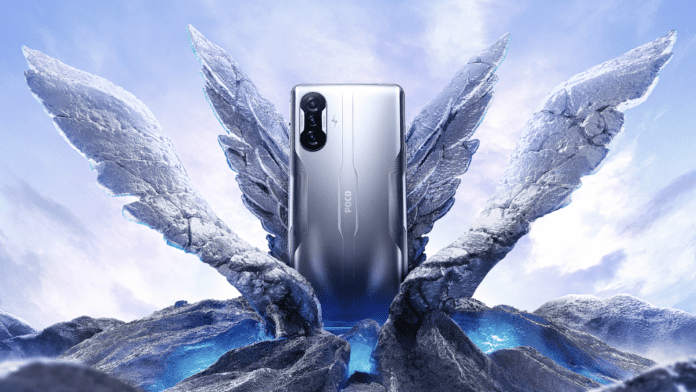 Upfront, there’s a 6.67-inch 10-bit FHD+ display with a refresh rate of 120Hz and a sampling rate of 480Hz. It has a centred punch-hole cutout housing a 16MP camera for selfies. Moreover, it also comes with Gorilla Glass 5 protection on both sides. The display features a 100% DCI-P3 colour gamut and HDR10+ certification.

On the right side of the frame, it has Maglev Mechanical Triggers, which pops up physically when needed, and the smartphone also features an X shocker that can decode upto 200 vibration effects. Furthermore, the Poco F3 GT comes with dual stereo speakers with support for Dolby Atmos, and it also has a triple mic setup.

Under the hood, the Poco F3 GT packs in Mediatek’s Dimensity 1200 chipset coupled with either 6/8GB dual-channel UFS 3.1 RAM and 128/256GB UFS 3.1 storage. The smartphone features an aerospace-grade vapour chamber cooling for quicker heat dissipation. The F3 GT runs MIUI 12.5 on top of Android 11. There’s a 5070mAH battery inside with support 67W fast charging. Rejoice there’s a 67W charger included in the box.

The F3 GT sports a triple rear camera setup, including a 64MP primary camera, an 8MP ultra-wide camera and a 2MP macro camera. According to Poco, the 64MP camera comes with an ED ultra-low dispersion optical glass lens that offers better picture and video output than other 64MP sensors. The LED flash is shaped as FLASH, and there’s also an RGB accent around the camera module doubling up as dual-LED flash.

The Poco F3 GT will be available for preorders starting July 24 in two colours Gunmetal Silver and Predator Black on Flipkart. With F3 GT, Poco is following a new pricing strategy termed Mad Reverse Pricing, under which the prices for the first two weeks will be less than the actual MRP.