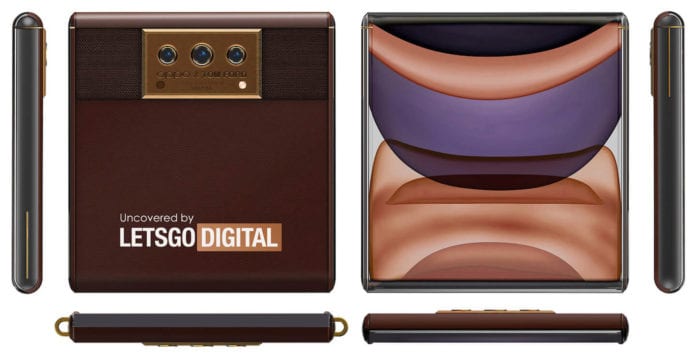 Over the last few years, Oppo has showcased some of the concepts of the most interesting smartphone and earlier this year Chinese manufacturer patented a slider smartphone with an expandable display which was later revealed at Oppo’s INNO Day as the Oppo X 2021. Now, we have some renders showcasing the Oppo X 2021 courtesy of LetsGoDigital.

The renders show the smartphone in its closed form, and when the closed smartphone is small and squarish, as compact as a visiting card. But it’s more than that- instead of having a folding display, Oppo X’s screen is retractable, which can be expanded into a fully-fledged smartphone increasing the screen size by 80%.

The display is curved on the edges at top and bottom, and according to the report, the smartphone will be having two pull tabs on the sides for easy rolling, with an option to hung the smartphone around your neck. Moreover, there is no indication of physical buttons, charging ports, and selfie camera except a sim card tray which is visible when extended.

We don’t have any official information about the commercial availability of the Oppo X Tom Ford, or if there is going to be a standard edition, Oppo X. But we can expect it to debut sometime in 2021 considering LG is also preparing to introduce its rollable smartphone sometime next year.