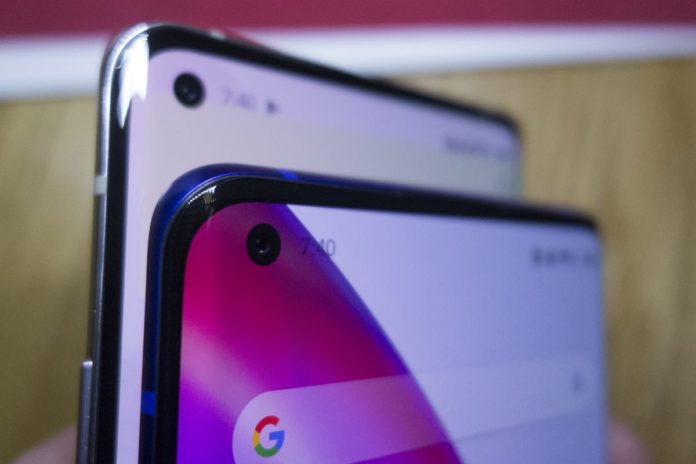 If you’re active on Twitter or Tech Reddit you’re probably receiving a million notifications regarding display issues on the OnePlus 8 Pro from prominent subreddits and influencers. Not going to lie, before I purchased my own unit of the OnePlus 8 Pro I was quite worried about how the display would hold up in the long run and whether I was making a financially sound decision, just like every other prospective buyer. Green tint, black-crush, banding, and color shift – terms were being thrown out quite liberally without much explanation as to how it can affect your experience and whether it’s even significant enough to be considered an “issue” for the average consumer? Let’s break that down, shall we?

Turn your OnePlus 8 Pro off-axis a bit, and there you go – “THE WHITES LOOK GREEN!” Okay, sorry to burst your bubble, but that’s not what reviewers mean when they say green tint. Almost all OLED displays have a degree of color shift, right from your most premium iPhones to your flashy Samsung flagships. What tech writers mean when they say green-tint is the inherent “green bleeding” you see on a completely grey background at the lowest brightness.

At first glance, this seems like an “issue” but in reality, it doesn’t matter squat! Unless you’re some sort of psychopath that likes staring at an empty grey screen that’s visibly dim for copious amounts to fall asleep, I don’t see this issue bothering anyone. Sure, it seems like an eyesore on a phone that costs as much as the 8 Pro does, but this issue is akin to poking a sebum filled zit just because “it’s there”. Even if this problem does manifest on the device you buy, it is not going to take away from an otherwise stellar media consumption experience which I can personally attest to.

I’m pleased to report that the black-crush (more on this here) has all but been solved with the OnePlus 8 Pro with multiple software patches. Sure, it was solved by increasing the minimum brightness setting for the first line of users which many considered unsavory, but the issue isn’t one that seems to bother current production units of the phone. Turning off DC dimming does cause this issue to flare up, but remember the zit reference? If it works just go with it! I see no point enabling experimental features just to find some issue with your phone that will otherwise not affect your daily experience. Here’s another zinger, most Samsung panels on the S20 series have faced this issue as well. Considering that OnePlus and Apple procure their OLED panels from Samsung, this is inherently a Samsung issue.

The only reason this issue went under the radar with the S20 was because of people’s adjusted expectations. Let me explain. Common consumers have grown to expect premium pricing for Samsung flagships and they’re more than happy to spend the money whilst reigning in their nitpicky nature – all because Samsung has stellar after sales support! OnePlus just doesn’t inspire the level of trust that Samsung does with their products and pricing the OnePlus 8 Pro within the S20’s price bracket is definitely going to leave room for intense nit-picking. Blissful ignorance is all.

Now, this is an actual issue! Whilst reading text with grey backgrounds you can subtly make out black bars or banding along the top edge near the punch-hole or along the sides on certain units. This is an issue you should definitely watch out for and thankfully you’re guaranteed a replacement if you face this niggle with your device as of our conversation with a OnePlus representative!

OnePlus Sponsored This Article Didn’t They?

Contrary to what you believe after seeing me stick up for OnePlus in this article, they did NOT sponsor this article! And they don’t need to either – my experience with the OnePlus 8 Pro has been overwhelmingly great, right from the smooth display to the fluid performance! Even if the phone does seem to have a few niggles here and there in terms of display discrepancies, I’m still going to stick to this phone considering no-other phone in this price range offers the sort of experience that the OnePlus 8 Pro does. For that alone, I forgive them and urge you to as well. After all, using the phone is a completely different ballgame from picking it apart on a random thread online!