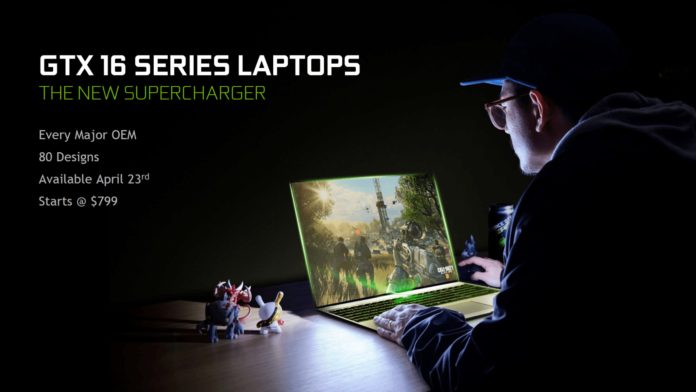 Along with the GeForce GTX 1650, NVIDIA today also announced the GTX Turing laptops starting from $799. These laptops will sport the same desktop parts, albeit with adjusted clocks for thermal compliance. The highlight of this launch is the GTX 1660 Ti for notebooks, offering 100+ FPS in popular titles like PUBG, Fortnite and Apex Legends at 1080p. Compared to the GTX 960M, the new Turing mobile part offers 4X more performance at the same TDP.

The official figures mainly compare the GTX 1660 Ti to the but expect identical frame rates as the desktop part. There’s not a whole lot of difference between the two variants other than the handful of notebook exclusive features such as NVIDIA Optimus and Max-Q technologies. Like is aimed at 1050 and 950 users, the 1660 Ti is being marketed as the go-to card for users of the earlier x60 GPUs, with NVIDIA claiming that 3/4th of GeForce gamers own a GTX 960M machine or less.

Like the other Turing SKUs, the GTX 1660 Ti for notebooks retains all the architectural upgrades such as improved hardware level NVENC support for streaming, concurrent int, float as well as the unified cache system.

NVIDIA’s official press release doesn’t say anything about the rumored Ryzen+GeForce Turing laptops, but the 9th Gen Intel Core processors have been confirmed. There will be an expected 80 laptops at launch with offerings from every major retailer.