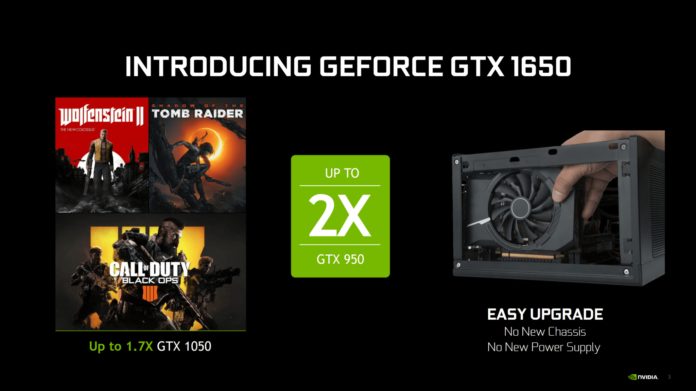 NVIDIA today launched the GeForce GTX 1650 for a global price of $149 (Rs. 12,999 in India). Aimed at providing performance on par with the GTX 1060 3GB, is the ideal upgrade choice for gamers using a GTX 1050 or 950. It’s surprising how accurate leaks can be these days, with the official specs being the exact same as those shared many days prior to launch.

The GeForce GTX 1650 unsurprisingly comes with 4GB of GDDR5 memory paired with a 128-bit wide bus, resulting in a bandwidth of 128GBps. The shader count is also the exact same as what we shared earlier (896 Cuda Cores), with an expected boost clock of 1665Mhz. Please note that the boost clock will vary from OEM to OEM, depending upon the thermals and bios configuration. The GTX 1650 will have a minimal power draw of 75W, eliminating the need for an extra power connector.

Similar to the previously launched GTX Turing cards, will carry over all the improvements of the new architecture with the exception of the RT and Tensor Cores. This includes concurrent float and int execution in the GPU pipeline, a unified cache architecture as well as adaptive shading. Furthermore, the card won’t get a Founders Edition and all board partner variants should see an immediate launch following the announcement.