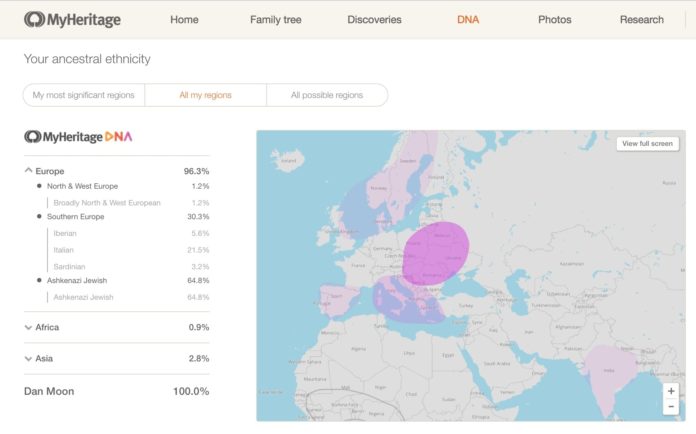 Genealogical DNA testing has advanced a lot in the last decade or so, with some tests allowing you to trace your lineage almost a dozen generations back. There are multiple types of DNA tests. The most common being Y-DNA testing, Autosomal DNA testing, and Mitochondrial DNA testing.

Y-DNA tests compare the chromosomes in the 23rd pair (Y chromosome). Autosomal DNA tests look at the rest of the 22 pairs of chromosomes called the autosomes. And lastly, mtDNA tests consider a tiny snippet of DNA extracted from the mitochondria. For more info on these tests, visit this page.

Most companies rely on Autosomal DNA testing which can be used to track your ancestors who lived some 500-1000 years in the past. These include MyHeritageDNA (the one we’re reviewing today), AncestryDNA, etc. Some other companies like 23andMe DNA, FamilyTreeDNA, and LivingDNA also offer the more complex Y-DNA and Mitochondrial DNA tests, but only half of them have global coverage.

When looking for a DNA test kit, other than the price there are two things you need to keep in mind. Firstly, the accuracy of a company’s tests depends directly on its database count. The higher the figure, the more accurate their tests will be. Secondly, 23andMe and some other DNA testing companies offer multiple kinds of DNA tests as a combined package for a rather reliable price, so it’s always better to check them first before your splurge, as that way you can learn a lot more about your descend than the regular Autosomal DNA test.

In this post, we look at the most affordable one, MyHeritageDNA’s Autosomal test which is priced at $69 for most part of the year. Generally, other companies charge you $100 for the Autosomal test and somewhere between $150 and $500 for combined packages which may even include all three DNA tests. So if you are on a budget or the other major companies don’t ship to your country, then MyHeritageDNA is a quite viable option.

I got my kit almost a month after ordering it and to be fair it was justified. It had to travel from Texas all the way to Bangalore, India. The kit was shipped via USPS and was decently packaged. It contained two cotton swabs along with two vials filled with water to store them after taking the samples.

The process to take the DNA is fairly simple and explained in the image above. After taking the samples, you have to activate your kit online by entering your kit-code on the website. It is quite straightforward and I didn’t run into any problems as such.

Note: You are required to ship back your samples to the lab in Texas at your own expense.

After the samples reached the lab, it took roughly two to three weeks to generate the DNA results. Although I got a fancy video showing my ethnicities plus a tune associated with their native culture, the results were quite lacking when it came to details. For example, I paid $69 just to find out which ethnicities make up my DNA. They are divided as per continent and indicated in percentages:

Now, that’s all well and good but from what I’ve been told my family’s origin dates back to North-Western Persia in the late Medieval period. According to the report, although a significant chunk of my DNA points to Iran and Turkey, I have a much higher percentage of Central Asian DNA. That seems fair considering all my descendants in the past 200 years or so lived in this region.

This means either that before the Balkans, my ancestors lived in North-East Europe explaining the 1% Baltic descend and considering the distance they covered after that it’s not very hard to picture them traveling halfway across the European continent. The part that doesn’t make sense, however, is the Central American 1% which is most likely just an error or someone somehow up the line ran into a fine Central American gentleman and got very very close to them.

Like all other DNA testing companies, compares your DNA with the other users’ in the database to check for matches. This can be useful if you’ve got lost family somewhere but the chance of actually finding a close relative is almost negligible. Still, you never know, you might find some individual on the other side of the globe who you’re related to although but related nonetheless. And it’s always nice to have some more friends.

I got around a dozen matches with half of them sharing 0.2% of my DNA. These folks are from all over the world, from Germany and Denmark to Romania and even the UK and US. MyHeritageDNA usually has the contact details of all your potential matches and you may choose to get in touch with them to find out if you are actually related.

It is always fascinating to go through history and even more interesting if it’s your family history. Although many people may not find it necessary, but knowing where you roots lie is never a bad thing and you may or may not like what you find. Regardless, is a decent albeit limited DNA testing option, with a lower price tag than most of its competitors out there and offers global shipping as well. So for starters, this is a fine option, although if you are more into the subject, you may want to check out the other packages from other companies for a more comprehensive analysis.