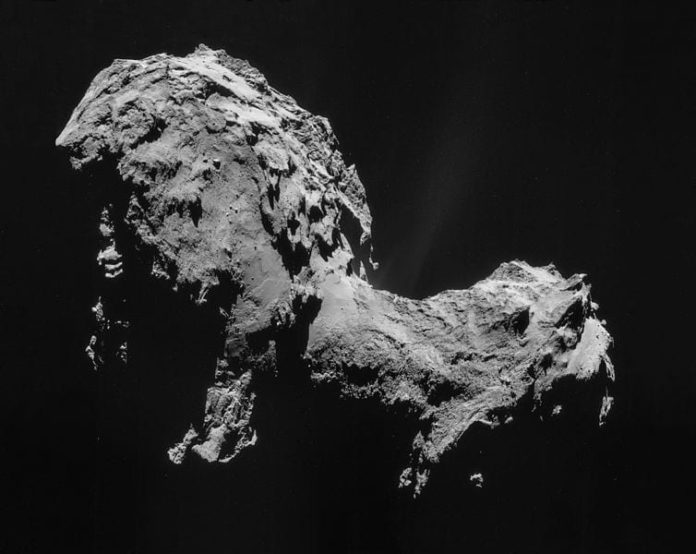 Life in space has been a subject of debate for a long time now. There has been a lot of conjecture about the presence of elements of life on different planets and moons. But what about other celestial bodies? In a recent study conducted, scientists have found molecular oxygen on the distant comet 67P.

The astonishing discovery was made by the instrumentation onboard the European Space Agency’s Rosetta space probe. This Jupiter-family space rock, also called the Churyumov–Gerasimenko space rock, wasn’t just found to contain oxygen, but also water and carbon dioxide.

The Rosetta scientists initially assumed the oxygen was primitive relic from the earliest days of the solar system and not necessarily an evidence of alien life. It was proposed that oxygen was stored in the comet’s nucleus from the time the solar system was born 4.6 billion years ago. However, later a separate group of researchers came up with a different supposition about the source of oxygen. They said that one way to create the oxygen compound was using charged molecules or ions. When the comet’s orbit passes close enough to the sun, the intense heat from the burning star melts the ice on 67P’s surface. The melting ice then leads to the formation of a gaseous atmosphere known as a coma. It is in this layer that the Rosetta group found carbon dioxide, carbon monoxide and molecular oxygen.

However, in a research paper published a few days back for the journal Nature Communications, the scientists challenged this theory as well. They argued that the proposed assumptions/mechanisms aren’t sufficient to produce the amount for oxygen present. Lead author Kevin Heritier, Imperial College London, claimed that, after testing the new theory of surface molecular oxygen production, they found that the amount of energetic ions present could not produce enough oxygen to account for molecular oxygen observed in the coma.

Finding oxygen on a comet is a startling discovery altogether. And although, the team remains confident that their primordial oxygen theory is most compatible with the measurements taken by Rosetta, there is still a lot of research remaining on the subject until some solid evidence can be found to establish the facts.