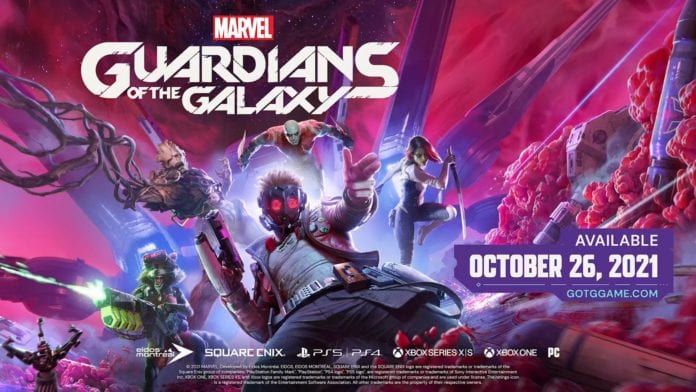 The Guardians of the Galaxy are back, this time in video game form as revealed at Square Enix Presents E3 2021.

After the disaster that was the Marvel’s Avengers game, Guardians of the Galaxy seems to be headed in an entirely different direction – a single-player experience.

The cinematic and gameplay Trailer shows the guardians that we know and love getting into various hijinks as a group, while the player controls their leader Star-Lord. Star-Lord or Peter Quill can control how the other guardians can attack in combat via commands.

The guardians quip and bicker their way through various types of enemies, including a red cube with weapons and “Space Dogs”, as Quill calls them.

The player also seems to have a choice on how the game’s narrative flows, as they can make decisions as Peter Quill that lead to different outcomes. One of those choices, throwing rocket over a cliff seemed to make Rocket angry, which can be expected to affect later on in the game.

The choices system is not unfamiliar to the series, as the first game featuring the Guardians of the Galaxy was made by the now-defunct Telltale Games. Telltale games were known by their choice and consequence-oriented games.

Another thing that telltale’s Guardians of the Galaxy and this one have in common is the lack of the original cast for the Guardians, as the movie versions of the characters are different from the ones in the game. This trend was first established in Marvel’s Avengers, which also didn’t have the original cast of the Avengers.

Guardians of the Galaxy also keeps the series’ penchant for including pop music from the past, as “Bad Reputation” and “I need a Hero” both make an appearance in the trailer.

The game seems to borrow heavily from the Mass Effect series, with the space setting and the choice mechanic reminding one heavily of the franchise by Bioware. With the Mass Effect games themselves not having a great track record these days, what this means for Guardians remains to be seen.

The biggest thing that Guardians of the Galaxy has on its side looks to be its single-player nature. Marvel’s Avengers’ biggest criticism rested upon its online-only nature and what that meant for its gameplay. After being burnt once, Square Enix looks to be shifting their approach to superhero games.

When and Where to get Guardians of the Galaxy

Guardians of the Galaxy releases on PC, PlayStation 4, PlayStation5, Xbox Series X/S, and Xbox One, on October 26, 2021. you can pre-order it here. The game is being developed by Eidos Montreal and will be published by Square Enix.