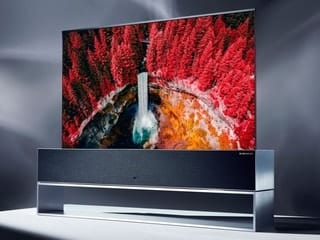 Korean electronics giants LG just announced an OLED TV that can be rolled up like a sheet of paper during CES 2018. It was only a couple of years back when LG showed off a conceptual 18-inch OLED display at CES 2016. Now that prototype has grown to 65 inches in size. The rollable OLED prototype provides an UHD (4K) resolution.

Well it’s still more of an experiment and is still in its prototype phase. If commercialized, it could prove to a game changer in the TV industry. The foldable design will provide easier storage and transportation than the conventional OLEDs. The display panel becomes more organic and nature being flexible enough to roll. This gives it the attributes of a very big sheet of paper. The fact that OLED displays are lightweight is another factor that will allow for better space utilization.

LG has not shared any other technical details about the TV other than that it boasts 4K Ultra High Definition (UHD) resolution as mentioned earlier.

This gets to show why LG has been a leader in the TV industry for so long. These innovations are exactly what makes us love tech and helps the industry to move forward. Let’s just hope we see something much more refined and something that’s past its prototype phase and ready to be launched in the real world in the future.