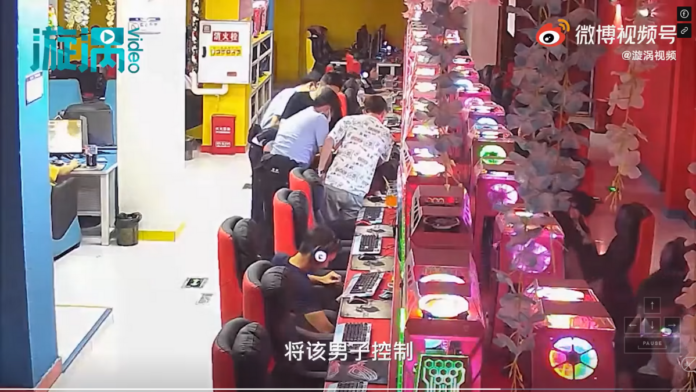 Being at the top of his game got a Chinese League of Legends player arrested for a recent civil assault case.

Imagine that you are an off-duty police officer, just hanging around your favourite gaming cafe playing your favourite game, League of Legends. While you are in-game, the speakers inside the cafe loudly announce the arrival of a Challenger Ranked player in your midst. Naturally, you get curious to see who the highly-skilled veteran of the game is, so you take a peek.

What you see nearly causes you to double up as the player is a criminal in your area. You waste little time and call your squad to have the League of Legends player arrested for his supposed crimes, and all is well again.

This sounds like the plot of a low budget youtube sketch video, but it is far from it. This is exactly what happened in the city of Chongqing in China. The name of the police officer who got the League of Legends player arrested is Yihao Zhang. Yihao confirmed the player’s identity before calling his partners from the Chongqing Police force over to arrest the man, who was still playing the game at that point.

If a player has the rank of “Challenger” in League of Legends, it means that they are the absolute cream of the crop in that game. Only about 0.012% of players ever get to this level, coming up at about 1500 players total in the entire world. That isn’t it, either. The League of Legends player who got arrested played on the oldest and most populated server in China, the Ionia server, making his achievements that much more remarkable.

Read More– Will the Global Chip Shortage affect the Rollout of Windows 11?

The cruel irony of the entire situation is that his rank played a huge part in getting the League of Legends player arrested. In some places in China, the cafes announce players’ names if they reach a high level in a game whenever they play there to earn notoriety for both the cafe and the player. If the accused was just a regular player like Yihao Zhang, he would have gone almost completely unnoticed and would have gone his merry way home after finishing his games.

So, above all else, his notoriety is what got the League of Legends player arrested, apart from his alleged crimes, of course. So remember, kids, the lessons to be gained from this tale are don’t be good at games and don’t do crimes.

The entire ordeal was recorded on the cafe’s security cameras, which can be seen here if you can safely open websites based in China or here if you want an alternate source. The video is located at the bottom of the page in the alternate link for your viewing pleasure.