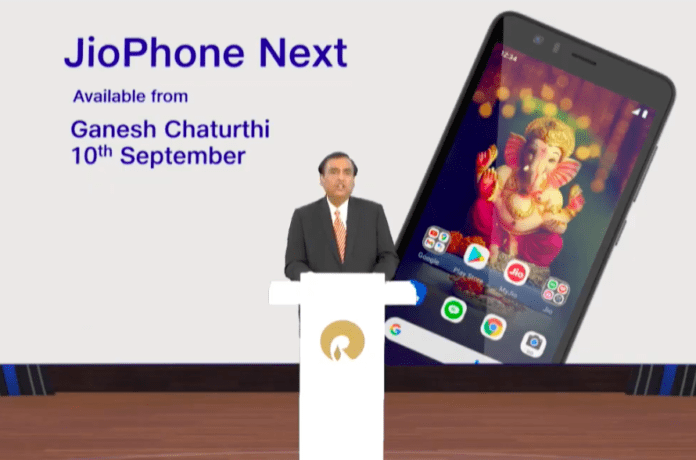 During Reliance’s 44th Annual General Meeting, Mukesh Ambani announced Jio’s next smartphone, the JioPhone Next, in partnership with Google. The upcoming JioPhone will run an optimised version of Android and come with Google’s Play Store.

The JioPhone Next will be an affordable offering from Jio. It will come with best-in-class entry-level hardware to attract a mass audience and democratize the 4G network further. Moreover, it will feature a voice assistant, automatic read-aloud of screen text, language translation, and support for the latest Android updates.

The JioPhone Next will be coming with a great camera with Snapchat Lenses integrated into the camera along with Night Mode and HDR.

“India still has nearly 300 million mobile users who are unable to escape from inefficient and exorbitant 2G services… because even a basic 4G smartphone remains unaffordable for these users. Last year, Sundar and I had talked about Google and Jio co-developing a next-generation, feature-rich, but extremely affordable smartphone.” While many features of the upcoming phone were revealed, and its launch date of Ganesh Chaturthi, September 10, the price of the phone was not announced yet, only that it will be “the most affordable smartphone not just in India, but globally,” said Mukesh Ambani at Reliance AGM.

The JioPhone Next is slated to go on sale from August 10 on the occasion of Ganesh Chaturthi. However, there’s no word on the pricing yet, but we expect it to priced competitively to outdo the other smartphone manufacturers.

During the AGM, Sundar Pichai, CEO of Google, said, “I’m excited that today, we can announce the next steps in this vision: Starting with a new, affordable, Jio smartphone, created with Google.”

He further added,” Our teams have optimised a version of our Android OS especially for this device. It will offer language and translation features, a great camera, and support for the latest Android updates. It is built for India, and it will open up new possibilities for millions of new users who will experience the internet for the very first time. And we can’t wait to show you the device later this year.”

This comes after Google’s investment of ₹33,737 crores in the Indian telecom giant, entitling the internet giant a 7.7% stake in Jio. Sunder Pichai also announced a partnership between Google Cloud and Jio.