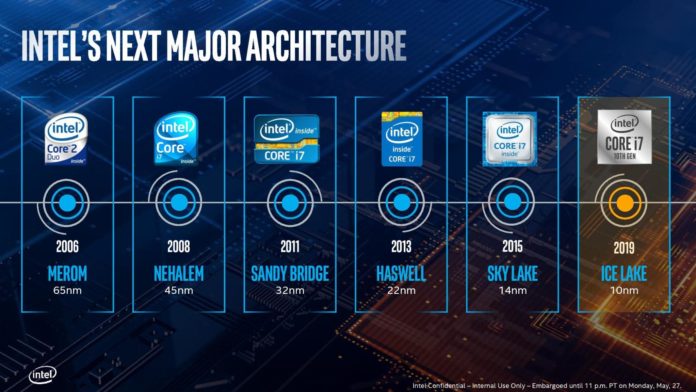 Intel just launched its highly anticipated 10nm Ice Lake CPUs just yesterday after what seemed like a delay of forever. Originally set to debut as Cannon Lake many years back, the 10nm chips have been delayed so many times that many had started to think that it’s merely a joke. However, expectations finally met reality yesterday when select reviewers were given a day with Intel’s 10th Gen Ice Lake-U powered laptops. Although this can’t be called a review, it does give a fair idea of the chips’ potency in everyday tasks.

You can check out our performance analysis here. The performance especially the IPC gains are solid despite the tame clocks and now the only concern is the availability of these parts as many rumors have claimed that the 10nm Ice Lake devices will be very limited. As far as the price is concerned, the 10th Gen lineup is priced the same as the preceding Whiskey Lake SKUs, at least according to Intel Ark.

As you can see, the specs are very similar right from the core counts to the TDPs. However, when you compare the operating clocks, Ice Lake is much slower but despite that beats its predecessor by a fat margin. The interesting part is that Intel’s recommended price for the Core i7-1065G7 is just a dozen bucks higher than the i7-8565U. This is a bit surprising as the former not only features the newer Sunny Cove cores in addition to the 10nm process but also leverages the vastly superior Gen11 iGPU which is good to run most games at 1080p low-medium.

The i5s also look similar and although the idle power draw for the 1035G is marginally higher, it has a boost clock of just 3.60GHz compared to the i5-8265U’s 3.9GHz. This can once again be attributed to poor yields, but the superior IPC of Ice Lake more than makes up for it. In this case, the prices are the exact same, $297 for both the SKUs.

Keep in mind that these are the initial launch prices and OEMs might hike them as per availability and demand. Considering that the Comet Lake-U processors are also being primed for launch, I can say with a good level of certainty that Ice Lake and its performance advantages will be limited to premium devices while most consumers will have to look towards the 14nm options including Whiskey Lake and Comet Lake.