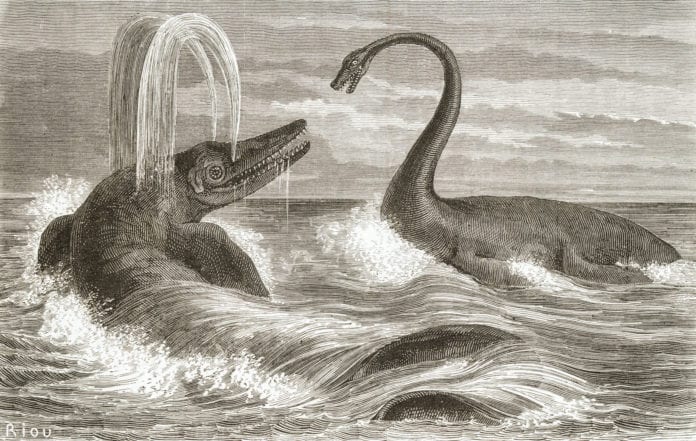 Thriving in the Mesozoic Era, Ichthyosaurs were a group of aquatic reptiles similar to porpoises in appearance and habits. Not to be confused with dinosaurs, they were highly specialized aquatic reptiles. Since the Ichthyosaurus is a representative genus from which the larger group takes its name, Ichthyosaurs varied largely in their size.

With the smallest measuring 10 feet in length, these reptiles were very fish-like in their appearance. They had a streamlined body equipped with limbs morphed into paddle-like appendages for efficient propulsion in the water (more on Ichthyosaurs here).

The blue whale’s title of being the largest creature to ever exist is under threat, as the discovery of an Ichy’s jaw fossil might hint toward the possibility of an even bigger animal. The largest ichthyosaur skeleton ever found was 21 meters long.

This discovery was made in Columbia, and the species was Shonisaurus sikanniensis. Looking at its visualization, one wouldn’t expect that average-joe-fish frame to fill out such a ginormous mass. However, we may have found a larger fossil, or what’s left of one.

An amateur fossil collector named Paul De La Salle was out venturing on a beach in Somerset when he stumbled upon a peculiar rock. Thanks to his prior experience, he was able to make out the distinct indentations and the framework of the skeleton to be that of an Ichthyosaur. After consulting the renowned palaeontologist, Dr. Dean Lomax, the discovered sample was thoroughly examined. It was concluded that this was a single jawbone, a component of the entire jaw.

This Ichthyosaur fossil was probably a whale fall: where the dead body of a whale sinks down to the ocean after which the flesh is consumed by the life around leaving the bones to the mercy of the ocean currents which usually chew the bones up and spit them out in places like the beaches.

This jawbone belonged to an Ichthyosaur of the species, Shonisaurus sikanniensis, which was the same as the largest Ichthyosaurus fossil found till date. Close observation and correlation led to the conclusion that this single jawbone was 25% larger than its counterpart in the 21-meter fossil leading to the estimation that this specific swimmer could’ve been a gargantuan 26 meters long.

Since the remains are incomplete, there is no tangible proof. Nevertheless, the possibility of a larger animal existing cannot be denied. There very well could’ve existed creatures which rivalled the colossal blue whale in sheer size and heft. There may be one lurking in the depths below right now.