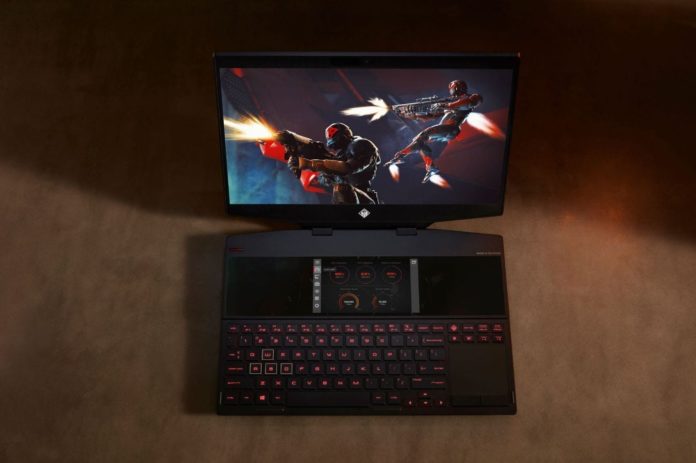 HP has updated its OMEN and Pavilion laptop line up in a bid to become more competitive in the gaming laptop market. The main highlight of this new lineup is the OMEN X 2S which features a secondary screen between the main screen and the keyboard.

When ASUS first announced their ZenBook Pro Duo with dual-screens, everyone questioned the practicality of the second screen. But now, HP has also joined the dual-screen bandwagon. However, the fact that Asus has still not released its ZenBook Pro Duo and is expected to launch it in the 3rd quarter of this year gives OMEN X 2S the title for World’s First Dual-Screen Gaming Laptop.

The line-up will start from Rs. 70,990 with the Pavilion Gaming 15. It’s an entry-level gaming laptop with specification option to choose between 9th Gen Intel Core i5 and i7 processors and up to NVIDIA GTX 1660Ti Max-Q.

Let’s talk about the crown jewel of this lineup, the OMEN X 2S. The main screen on the OMEN X 2S has a 240 Hz refresh rate and is Nvidia G-Sync compatible while the second screen features a 6-inch 1080p touchscreen panel.

The second screen will allow the users to send WhatsApp messages, stream music, and YouTube and is a hub for the Omen Command Centre software. It also allows users to place certain portions of the game such as the maps of racing games in the second screen. The OMEN X 2S is a high-end system intended for hard-core gaming with configurations going up to the NVIDIA RTX 2080 Max-Q design along with 9th Gen Intel Core i9 processors. Obviously, a high-end gaming laptop with two screens is going to cost a lot, this laptop has a massive starting price of Rs. 2,09,990.

HP has also developed a new cooling system called the OMEN Tempest that features 3-sided venting for 5-way airflow which helps them peak the performance by taking care of the thermals more efficiently. The company has also partnered with Thermal Grizzly and is using its Conductonaut liquid metal compound to boost thermal conductivity by up to 10 times higher than ordinary thermal paste. All these new thermal solutions have also allowed HP to reduce the laptop thickness by up to 20mm as compared to the previous versions.

In addition to these laptops, HP has also launched some new gaming accessories. One of them is the OMEN Photon Wireless mouse with Qi-Wireless Technology. Priced at Rs. 8,499, it boasts of 50-hour battery capacity and 11 customizable buttons. They also unveiled the OMEN Outpost mousepad which can fully charge the Photon mouse in about 2.5 hours and will cost Rs. 7,999. Apart from this, the company also introduced the Pavilion Gaming Headset 400 and 300 which will cost the buyers Rs 1,999 and Rs 1,799 respectively.