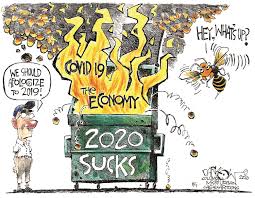 2020 has been a whiplash for us so far. We might’ve come into this year with new resolutions, in hopes of wiping the slate and starting over. Everything was going fine. No hiccups, until the 3rd day of the year. That was when the Iranian general, Qasem Soleimani was killed in a drone strike moderated by the US.

This incident was the tiny little domino which kickstarted the chaotic sequence of events which followed later in the year. The surprise attack led to the speculation of a third world war. A surge of WW3 related memes flooded the internet, fun to say the least.

Just as the threat of a third world war died down, the death of the Black Mamba took the sporting world by the jugular. Kobe Bryant, his daughter Gianna and 7 other passengers fell prey to the helicopter mishap.

Many fans couldn’t wrap their heads around this incident. The to-be Hall of Famer’s passing stunned viewers around the world, with the Lakers’ fans taking the hardest hit. When people started coming to terms with the 2 shocking events that had happened, that’s when COVID-19 struck.

This epidemic was accompanied by the blazing Australian bushfires, burning its way through the land down under. The fires raged on, burning vast stretches of flora and fauna to the ground. Nearly a billion animals died in the fires, which included a third of the koala population and a fifth of the country’s forests.

In contrast to the fires, flash floods terrorised Jakarta and Malaysia. More than 397,000 residents had been evacuated to higher grounds. The government had designated schools and government buildings as temporary shelters. In several areas, evacuation efforts were hampered by rushing waters and blackouts. The death toll soared up to 66 in just a few days.

Similar to the fast-moving fires, COVID-19 spread rapidly in its initial epicentre – Wuhan. Quickly spreading and affecting thousands, a pandemic was declared by the WHO in early March. Fast-forward a month, the virus has reached most parts of the world. From the USA to Honduras, SARS-CoV-2 was everywhere. Due to this, events like E3, Coachella, SXSW, Minecraft Festival and Seattle Comic-Con were cancelled.

To make things worse, the Hong Kong protests started getting violent around this time resulting in clashes between the public and the people. Hong Kong’s protests started in the month of June in 2019 against plans to allow extradition to mainland China. They really took off in 2020. (the protests explained in detail here)

Currently, Yemen is suffering from what has been called the world’s worst humanitarian crisis in the last 100 years, with many people not having the essentials that they need to survive, like food, water and shelter. The country is still at war, the struggle being between Saudi-backed pro-government forces and the rebel Houthi movement. The Syrian Civil war still continues.

The pandemic also resulted in the stock market crash of 2020. The last crash was in 1929. The global economy is expected to head into a recession—almost 11 years after the most recent one—as the Covid-19 pandemic continues to shutter businesses and keep people at home.

The NBA, MLB, La Liga and the IPL have been suspended for the time being. The Olympics has been postponed and the audience have been removed from the WWE’s Wrestlemania event. With some of the football clubs not being able to pay all of their players, some of the highly paid players agreed to take a salary crunch and be paid lesser than usual to help with the club’s expenses.

Giant murder hornets set foot in the States and Canada. These behemoths inflict some of the most painful stings in the insect kingdom. Huge Locust swarms are causing famine in east Africa. Now they have entered South Asia and the middle-east.

A swarm can eat the same amount of food as 35,000 people in a single day. They are able to travel up to 150 kilometres in a day in groups as large as 250 kilometres wide. The UN body has now called on the international community to provide nearly $76m (£58m) to fund the spraying of the affected areas with insecticide. Meanwhile, there is news of another Ebola outbreak in Africa.

The Losses and Causes

We lost many great artists this year. Irrfan Khan, who starred in international hits like Life of Pi and Slumdog Millionaire, died at the age of 53 after a long battle with cancer, specifically a neuroendocrine tumour. Rishi Kapoor, one of Bollywood’s most beloved actors also passed away due to Leukemia.

Sushant Singh Rajput of ‘Kai Po Che!’ ‘Chhichhore’ and ‘Ms Dhoni: The Untold Story’ fame, was found dead in his apartment with the apparent cause being suicide by hanging. Ian Holm, the Lord of the Rings actor died at age 88 on June 19 from an illness related to Parkinson’s disease. Bill Withers, the cherished vocalist who gave hits like ‘Ain’t no Sunshine’ and ‘lean on me’ passed away at 81 due to health complications. The list goes on and on.

Police brutality in America leading to the death of George Floyd, an African-American, sparked nationwide, and later worldwide protests. This unjust assassination without the due process of law, of an essentially innocent man, angered people around the world.

The officer responsible, Derek Chauvin was finally charged with second-degree murder and the other officers in the presence of the hate crime were fired. The protests, fuelled by the Black Lives Matter movement continued into July, demanding for an end to police brutality against African-Americans. In light of the movement, many other unjust incidents regarding racism and innocent deaths came to light putting the force involved under question and due judgement.

All that, and we’re just a halfway through the year.