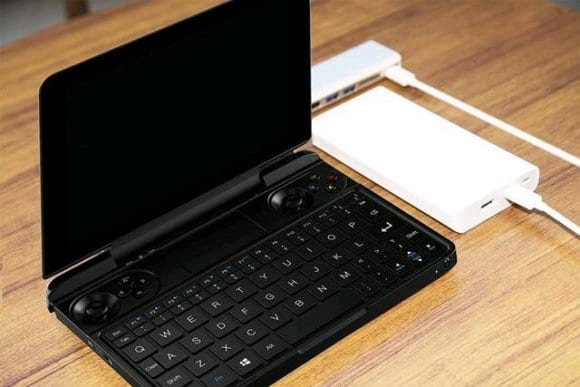 Recently, GPD a Shenzhen based electronics company revealed its latest handheld PC, the GPD Win Max. Its compact structure and powerful specs are good to compete with a regular gaming PC/Laptop, in fact adding some really cool features.

Primarily the tech company is going to make it available only in China for now. But still, developers and gamers are pretty excited about its arrival in the global market.

What powers this killer beast is the Latest Intel 10th Gen i5-1035G7 processor. With a 10nm architecture, this CPU is capable of performing very good in terms of gaming as well as daily routine tasks. It is paired with an 11th-generation Iris Plus Graphics 940 core display. Which GPD claims would compete the NVIDIA GeForce MX250.

On the storage part, the company has not hesitated to put a dual-channel LPDDR4 3733 memory, with 16Gb ultra-large capacity. Which has, read, write, and copy speeds exceeding 60GB/s. Along with that, it offers a 512 GB M.2 2280 SSD for storage. Didn’t get excited up to this?

For the connectivity section, the support for WiFi 6 and Bluetooth 5.0 puts things up further to the next level.

To juice up the PC, a 3 × 5000mAh / 57Wh large capacity polymer lithium battery(with 60W super fast charge support) has also been incorporated into the chassis.

According to the Chinese tech company, the WIN Max can run the latest AAA games, even with full graphics, at 60 frames per second. But in the real-world definitely the results are a bit different.

The official twitter handle @softwincn revealed some of the latest game FPS results for the GPD Win Max. As shown below.

Considering the size, the above results are pretty eye-catching. But still, the performance is not even throughout the various games that the company tested it for.

Pricing of the GPD Win Max:

The GPD Win Max price is expected to be in the range of $700-$850. Note, this pricing is still not confirmed. Though, it makes this handheld PC value for money device.

Gaming is gearing up to be very interesting over the next few months. Along with smaller gaming PCs, both Sony and Microsoft have also revealed their own next-gen consoles.

We’ll keep you updated on whether the GPD Win Max will come to India and when.