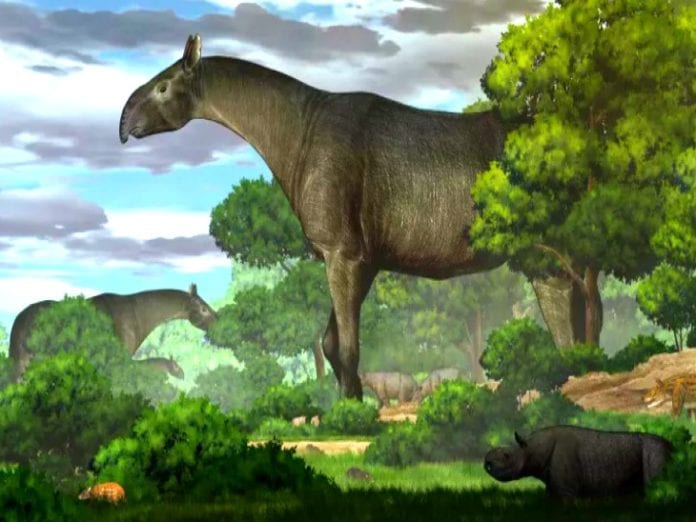 Scientists have discovered the fossils of a new species of the ancient giant rhino which was ‘taller than a giraffe’. The study of these giant rhino fossils took place in the Institute of Vertebrate Paleontology and Paleoanthropology. It has been discovered in northwestern China near the village of Wangjiachuan, southwest of the town of Dongxiang County and researchers say that it roamed Central Asia nearly 26.5 million years ago. These giant rhino fossils were the cousins of modern-day species of rhinos and weighed more than 21 tonnes, in fact, heavier than African elephants.

The mammoth ancient rhino’s skull and legs were longer than any other reported land mammals to date. It entered Asia via the Tibetan region which had humid climatic conditions. The region was an open woodland million years ago that made it suitable for the survival of such giant rhinos.

These rhinos were herbivores and lacked horns but were as tall as 23 feet which makes them taller than a present-day giraffe. They even ate tree leaves exactly as giraffes do. According to Pierre-Olivier Antoine, a National Geographic Explorer, and a rhino palaeontologist, “These giant rhinos would have been able to eat flowers at the third or fourth floor of a building.”

Researchers have concluded new findings from the giant rhino fossils found in a Chinese village in Gansu Province, located at the northeastern border of the Tibetan Plateau. The team of scientists was led by Dr Tao Deng, a palaeontologist at China’s Institute of Vertebrate Palaeontology and Palaeoanthropology in Beijing.

“Tropical conditions allowed the giant rhino to return northward to Central Asia, implying that the Tibetan region was still not uplifted as a high-elevation plateau,” said Prof Deng. Geological evidence suggests that until about 25 million years ago, the area still had some low-lying parts.

The study revealed a completely preserved skull and jawbone which further indicated that the animal had featured a slender skull and a prehensile nose trunk like that of the modern tapir. The team further discovered that the new species, P. linxiaense, was closely related to the Pakistani P. bugtiense, the giant rhinos that once lived in Pakistan. How did this giant rhino travel all the way to the Indian subcontinent?

Origin of the giant rhino fossils

The study has been published in the scientific journal Nature where these species of rhinos were termed as Paraceratherium Linxiaense. The newfound giant rhino fossils are an extinct cousin of today’s rhinoceros.

Paraceratherium fossils are rare and scattered, making it hard to outline the genus’s evolution and reach. The giant rhino fossils were unearthed below brown sandstones of central China’s Linxia Basin. In the 1950s, farmers claimed to have found “dragon bones” in the area. For a brief period, these remains were supplied to medical companies and used as pivotal ingredients in traditional Chinese medicines for curing diseases.

Linxiaense rhinos and their kin are all famous for their gigantic sizes, extremely long necks (longer than that of giraffes). The nose of the Paraceratherium Linxiaense was found to be flat and straight, and the dorsal surface of the skull was shallowly depressed. They had a deeper nasal notch, short muzzle bones, a diastema anterior to cheek teeth, and were mostly hornless. They were among the last of these giants, called paraceratheres, living about 26.5 million years ago. In P. linxiaense’s case, the fossils are now kept safely in the Hezheng Palaeozoological Museum in China’s north-central Gansu province.

With the help of their age and location, the new giant rhino fossils might help complete the paracerathere family tree and shed new light on how these massive mammals actually evolved and the reason they spread across the present-day continent of Asia. Antoine, the French palaeontologist, says the new study helps showcase geographic patterns that influenced the giant rhinos’ movements across ancient Earth.

Professor Deng has high hopes for future studies of the remains, including a reconstruction of the creature’s muscles and an accurate estimate of its body mass. He further says that since researchers now have evidence of giant rhinos crossing the present-day Tibetan Plateau, there may be many more fossils yet to be found in the region.