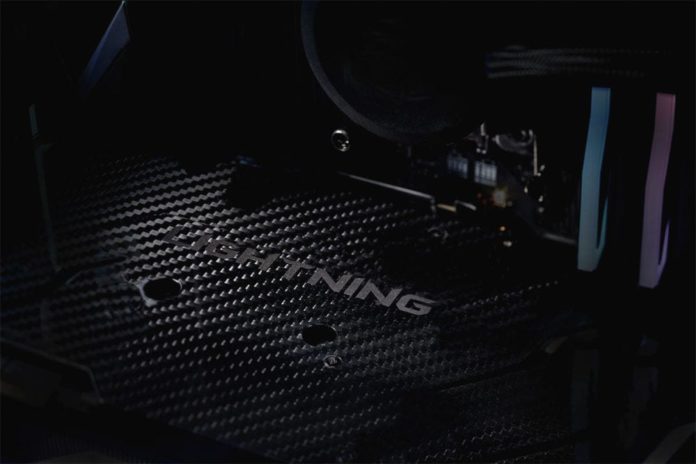 MSI has started teasing its upcoming GeForce RTX 2080 Ti Lightning Z for the ultra-high-end market. This premium graphics card is made for extreme overclocking and is designed specifically for the enthusiasts, where overclocking might include the use of liquid nitrogen. Normal cards can’t handle that level of overclocking, but these custom GPUs can. That’s one of the reasons why these super high-end variants are always launched after quite a long time from the standard cards because finding the best chips takes time.

A teaser was posted by MSI Japan that shows a back plate with carbon-fiber texture. This is the first time this TU-102 based card has been pictured officially.

Earlier, we had seen some unofficial photos of the card in its bare-bones state, with the PCB clearly visible and the cooler removed. The photos were submitted to HWBOT and confirmed the card’s existence. There are two different HWBOT listings with GPU clock speeds exceeding 2450 MHz.

The leaked pictures show a 19-phase VRM with three 8-pin PCIe power connectors. The right side of the board is covered by multiple fan and voltage connectors, the right end is covered by a heat plate with its own heat pipe to take care of the thermals.

The MSI GeForce RTX 2080 Ti Lightning Z is expected to be unveiled by MSI at CES 2019 within a few days.

NVIDIA Titan V Supports Raytracing in BFV Despite NOT Having RTCores