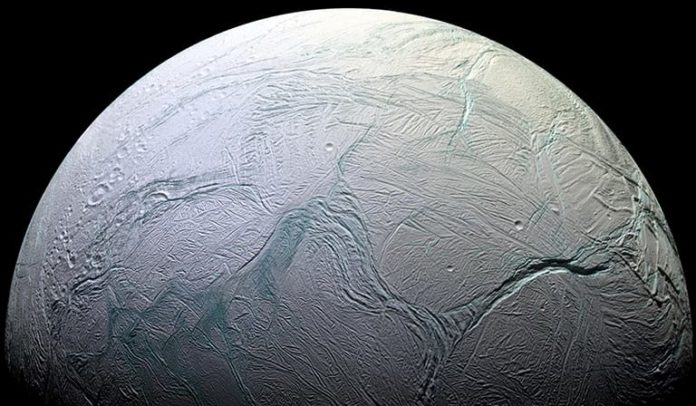 Scientists just found out that Saturn’s moon Enceladus has the very basic building blocks of life. A recent analysis of NASA data has revealed that organic compounds are present in the jets of water that shoot from Enceladus’s icy crust.

These organic compounds are composed of Nitrogen and Oxygen which are vital ingredients in the formation of Amino Acids, the building blocks of proteins. A rough inspection of life on Earth reveals that if life has to exist, it cannot do so without proteins.

Scientists have long suspected that the ocean underneath Enceladus’s surface could be harboring such organic materials. Data had previously revealed the presence of other organic compounds in Enceladus, but this is the first time organic compounds have been found dissolved in water.

This discovery is crucial as it means that the compounds could potentially undergo deep-sea chemical reactions necessary for producing amino acids. These findings were published last Wednesday in the journal ‘Monthly Notices of the Royal Astronomical Society.’ This discovery is also a green light to the global effort to find life and investigate the habitability of other heavenly bodies.

NASA’s spacecraft Cassini collected this data some time ago as it passed through the jets of water Enceladus spews into space. This unusual and exciting phenomenon has enabled us to analyze the chemical composition of Enceladus’s subsurface ocean.

Scientists suspect that there are hydrothermal vents in the subsurface ocean of Enceladus, just like on Earth. The heat from these vents, combined with the presence of Organic water-soluble materials, might be able to provide the necessary conditions for life to originate as they did on Earth.

Cassini, which provided us with this data, was launched in 1997 and spent 13 years exploring Saturn and it’s moons. In September 2017, the mission ended as the probe was sent to a fiery death in Saturn’s atmosphere as the scientists didn’t want to contaminate Enceladus or Titan, the two moons of Saturn which are suspected of harbouring life.