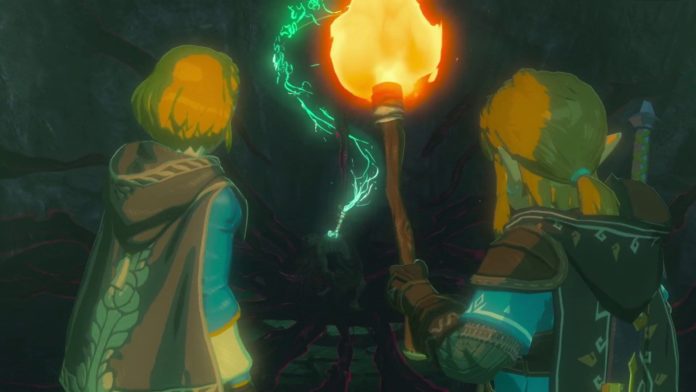 When Nintendo had just about wrapped up their E3 presentation, having already gone through the big reveals of Super Smash Bros. Ultimate‘s DLC, I was about to close the livestream and get on with whatever I had planned for the night. However, then I heard that there was one more surprise. I looked back, to see what looked like brand new DLC for the newest Zelda title, Breath of the Wild. Instantly hooked, I clambered back into my seat and watched eagerly as what looked like the mummified body of the series’ staple villain, Ganon, rise from the dead, presumably engulfing Hyrule Castle in darkness. However, I think it’s safe to say that Nintendo threw us all for a loop when they revealed that this footage was from a brand new Zelda game. I, for one, was absolutely delighted, and while it’s obvious to say that Nintendo was going to exploit the unique setting that Breath of the Wild gave players, it also makes sense for the progression of the story Nintendo was trying to tell with the latest Zelda game.

For starters, Breath of the Wild has what I believe, the most unique story in the entirety of the Zelda franchise, and it is one that you cannot simply wrap up in a single game. As if the sheer size of the world and the potential for exploration isn’t enough, Link’s journey through the once prosperous Hyrule forms a very interesting tale. Here we have a young boy, barely 17, who was thrust into possibly the most important role in the world, then actually dies performing his duty. He is awoken once more to find the world he once knew in shambles, with everyone he knew in his youth either dead or extremely old, and with no memories of them to boot. He has to journey all over the land he once knew to stop the beast that he failed to defeat 100 years ago. Breath of the Wild‘s story always felt incomplete to me, as I wanted to know what happened to Link and Zelda’s attempts to rebuild Hyrule. How would they go about it? As the last links to a time when Hyrule was prosperous, they have a mountain of a task ahead of them, and I’m glad that the new game will (presumably) explore this in some capacity. Much like the intertwining of the story between Ocarina of Time and Majora’s Mask, there is potential for the same to be done here, and since its not an often occurrence for a series that relies on re-incarnation of the spirits of our protagonists, its a welcome change.

Another reason why a sequel to this game was a good idea was the brand new format the original introduced to the Zelda franchise. An open world Zelda game was something that, prior to Wild, only the first game in the entire series managed to deliver on, and of course, it wasn’t nearly as detailed and fleshed out as Wild‘s version of Hyrule was. Could you really go back to a much more linear version of Zelda after experiencing the freedom that Wild presented us with? The luxury of having a jump button and being able to climb literally every vertical surface in the game is enough, but when you consider the multitude of armor, weapons, food, and even miscellaneous things to do, the prospect of a standard game feels extremely…..boring. Now, I’m not saying that this should be the way of the future for the Zelda series – but Nintendo rightly gave us more time to enjoy this form of the game with brand new content, and that is a brilliant move to not only drag fans of the original to this game but to incentivize new players to find out what the hype is all about by playing the original game first.

Lastly, the Nintendo Switch is still a very young console, having been released in 2017. Having two main series Zelda games for the same home console hasn’t happened for a very long time. I’m sure a large portion of us thought that the Wii would accomplish the feat, and while it technically did with both Skyward Sword and Twilight Princess being available on the system, the latter was a port from the Gamecube, so it wasn’t a new game per se. And since such a long time was put into making Wild the fabulous experience it was, it wouldn’t take Nintendo long to make its sequel, as it looks like the same core graphics are being used. This is perhaps the most important factor which leads me to say that this is a ‘masterstroke’, as what we are witnessing is the expansion of  the best of Zelda on what is arguably Nintendo’s finest system to date.

I’m ready for the ride. Are you?