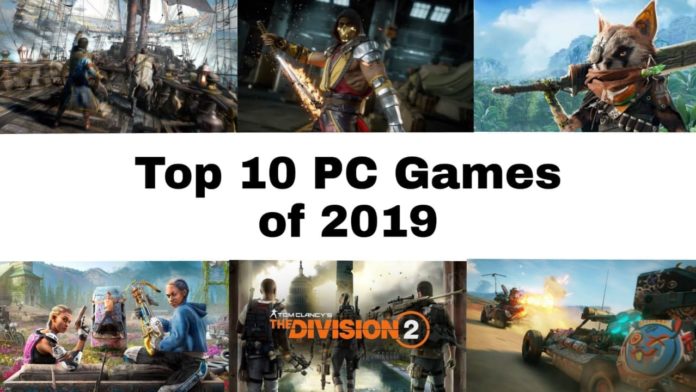 2019 has been a great year for the PC gaming community even though we just crossed the halfway mark. In fact, this list is already worthy enough to be called top 10 PC games of the year, which just makes the second half, even more, promising with releases GreedFall, Control, Outer Worlds, etc. Let’s get to it.

Capcom just hit the ball out of the park with this remastered or better say rebuilt version of their classic 1998 survival horror game. In the years to come, this game will act as a blueprint as in how to remaster an older generation game. Capcom masterfully fused modern graphics with necessary tweaks in the gameplay and story as well. The end product is one of the finest Resident Evil games to date. After the success of RE2, we won’t be surprised if other RE classics get the same treatment.

When Metro Exodus was announced, many were sceptical as to how a franchise known for its under the ground and claustrophobic gameplay will fare as an open-world game. The result was a refreshing entry in the Metro franchise, an inch closer to mainstream gaming. The overall game is a solid package with good graphics, interesting characters, deep storyline with multiple choices in between. The world is vibrant with the right amount of geographical changes and things to do. Yes, the game has occasional bugs but overall the game delivers an immersive post-apocalyptic experience.

From Software never disappoints when it comes to games which trigger controller smashing rage in gamers and Sekiro is another example of that. With games like the Soul series and Bloodborne to their name which nevertheless feature a similar kind of gameplay, Sekiro is a different beast altogether. Obviously, the gameplay is punishing and it requires hours of practice to master, but one of the most important things to note is that you have to shed your Souls habit to beat this game. The visuals are amazing and the lore is quite straightforward when compared to previous From Software titles. Sekiro is ‘the game’ to beat this year.

One might argue we already have a fair share of Battle Royale titles which we have grown tired of PUBG and Fortnite to name a few. Apex comes in like a breath of fresh air in this already saturated genre. The core focus is on the squad combat, in which 3 players per squad compete with other 19 squads for the glory. It has a bunch of interesting playable characters with each one having perks or strengths of their own and an interesting map to show them off on. Everything about this game oozes cool and of course, it’s free.

Capcom has had an amazing first half and they have punched right on the face of their critics and Devil May Cry 5 is another example of this. Returning to the spotlight after a futile attempt to reboot it in 2013. They brought back the original storyline, characters and a whole new level of attitude. Capcom used the same brand-new engine for this one which they used in RE2 and as a result of that, the game looks gorgeous. The combat is smooth and lets you slash and shoot demonic forces with utter style and finesse.

Rage 2 is a bizarre and yet effective fusion of Mad Max and Doom. It is set in a post-apocalyptic world with eerie similarity to that of Mad Max and fast no-nonsense gameplay of Doom. It picks the story where its predecessor left in 2011. The gameplay has quite a bit to offer as every weapon and even your trusty ride in the game is upgradable, a decent amount of abilities and a range of weapons to choose from. The game might fall flat at stages but it’s a more than decent shooter nevertheless.

One might remember Mortal Combat for its full-on gory fatalities and button smashing combat. Over the time of 27 years, the franchise has evolved a lot and the latest title is epitome to that. The gameplay is crisp and the story although a bit over the top at times is engaging and fantastic in the right way. The game also offers tons of customization options. It is hands down the most prolific entry in the franchise with well-developed game mechanics which adds depth to gameplay which is rarely seen in fighter games.

A Plague Tale: Innocence is a game that combines a riveting narrative with breathtaking visuals to deliver an unforgettable experience. It tells the story of two orphans surviving in a world plagued by the black death. The gameplay mostly revolves around stealth and further adds to the dark atmosphere of this game. The story unfolds in a linear fashion even tying up and restricting gameplay at times with not many options to select from and guiding every move you make. However, the game still manages to deliver a solid experience and is one of the surprises to pop out from the first half of the year.

The Division 2 makes up for everything its prequel lacked and took it up a notch. The game looks stunning, with a significant better gameplay mechanics and a reward system. It’s that type of game which will eat hours away from your life and still will be able to stand tests of time. The loot system is also on point and satisfying as it rewards you for hours spent in the game and keeps you coming back for more. Developers take note this is how you make a good sequel.

Total War: Three Kingdoms is hands down one of the best strategy game one can play right now. At the heart of this game is its brilliant gameplay, a healthy amount of characters which tells a story of epic proportion. The gameplay is also challenging in the right amount and make you ponder as what strategy will you rely on in your next move. The game is also pleasing aesthetic wise and one can just sit back and enjoy the way the battle scene unfolds in this game. No doubt it is the strongest entry in the Total War franchise and definitely worth the time.