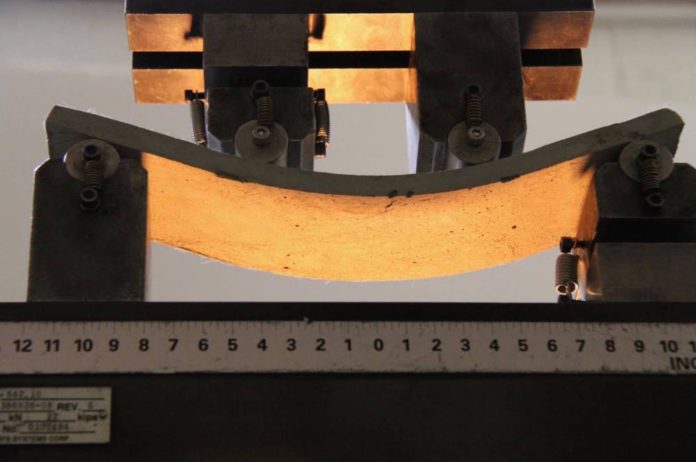 Scientists have recently created bendable concrete which is one step closer to hitting the market. The brand new concrete is composed of coal plant waste and synthetic fibres. The concrete itself is devoid of cement. With added features, it also helps reduce the environmental footprint. Bendable concrete is a mix of small fibres, generally polymer-derived, compiled into a microstructure. It helps give the material increased ductility in comparison to traditional concrete. Traditional concrete just cannot bend without breaking.

The researchers out of Swinburne University in Melbourne, Australia developed this new type of concrete. As mentioned before, this one is bendable and doesn’t require cement to compose it. In a test, the team put a gigantic weight on top of two pillars of concrete. The first traditional slab of concrete snapped under considerable pressure but the second one is where the wonder lies.

The second slab made use of synthetic fibres in the concrete mix. To manufacture it, they came up with a procedure which does not require heat to cure it. This radically reduces the impact on the environment. The heating of limestone is not required to make the cement component. It also emits a huge 76% less carbon dioxide which is definitely a better thing for the world. Behzad Nematollahi, a researcher involved in developing the material added that it is 400 times more bendable than regular concrete. It is ideal for environments around Earth that are prone to earthquakes.

Also known as Engineered Cementitious Composites (ECC), bendable concrete isn’t something new. Dr Victor Li, a civil and environmental engineering professor at the University of Michigan made it in the early 1990s. However, cost, supply chain concerns, and technical factors have prevented its widespread adaptation in the construction industry. As of 2019, it was 4 times more expensive to make than good old traditional concrete. Here’s hoping that this new bendable concrete can be produced cheaply on a mass scale.