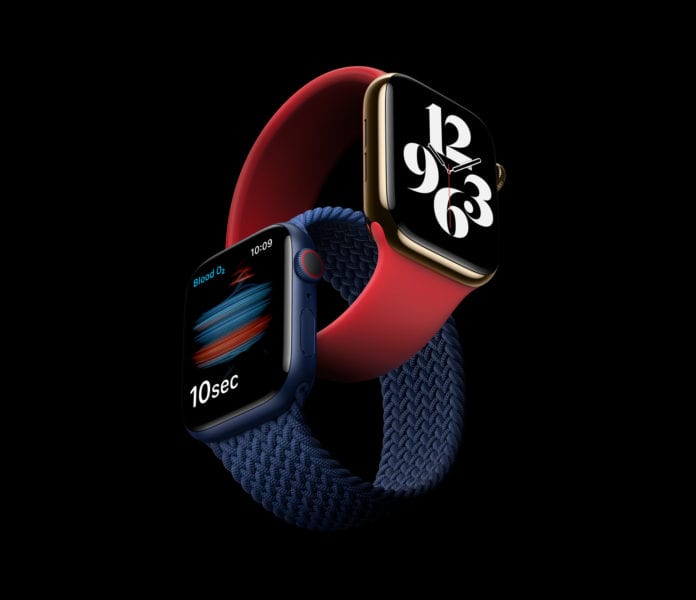 Well Well Well, no iPhones today. Tim Cook shattered all the expectations of the iPhone 12 launch today as he announced that Apple’s Time Flies event was mainly about the new iPads and Apple Watch Series 6. Apple took covers off  Watch Series 6, along with the new  Watch SE. Series 6 features all-new S6 chipset, real-time altitude sensor, improved always-on display and a lot more. Here’s everything you need to know.

The Series 6 maintains same overall design as the Series 5 but introduces a single strap, called ‘Solo Loop’, to the Apple Watch that is made of just one piece of silicone. The new watch comes with the all-new S6 processor, that is based on Apple’s in-house A13 Bionic chipset, and is a significant upgrade in terms of performance to the Apple Watch.

Apple says with the new chip, Apple Watch will be able to deliver the same performance as of Series 5 with 18-hour battery life. This is an improvement of over 3 hours, in terms of battery life. The Always-On display is now 2.5 times brighter than the Series 5 making it easier to see the watch when it’s laying on the table, or when you aren’t facing it.

Apple has added a new sensor to the Apple Watch that measures the altitude in real-time. Dubbed Always-On Altimeter, Apple says this sensor is accurate down to a foot.

Star of the show was Apple’s new Blood Oxygen Level Tracking in the Series 6. This new app will measure the oxygen saturation, or SpO2, of the user’s blood by utilising four clusters of green, red, and infrared LEDs on the back of Series 6 to measure the light reflected back from blood. Apple says the new Series 6 could even trace the early signs of respiratory conditions like influenza and COVID-19 even before the users show any symptoms of the diseases.