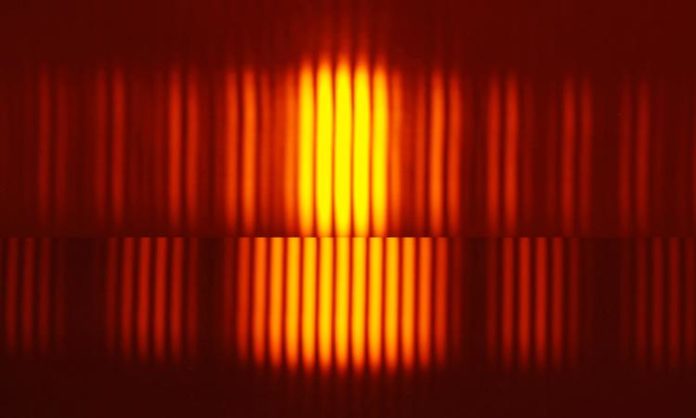 One of the most game-changing theories to ever grace modern physics has been the proposal that the constituent particles of light, photons, have wave-particle duality. While all these fascinating theories apply to matter, what about antimatter? Ever since it was first proposed by Louis de Broglie, it has been the subject of various interpretations and experimentations. There are also many other theorems which have originated from this in the subsequent years. Apart from photons, this theorem has since been implemented, tested and proven to apply to other subatomic matter particles such as electrons as well. Recently, this very common experiment has been used against an intriguing scenario and the results are interesting, to say the least.

In testing the theory of the wave nature of quantum particles, perhaps the most important and famous experiment has been the Young’s Double-Slit Experiment. The experiment involves a setup in which particles are fired from a source through a grating with two slits towards a detector sensitive to that particular particle. While particles travelling in straight lines would produce a pattern that corresponds to the grating, particles travelling like waves would generate a striped interference pattern.

Interference patterns have been obtained in the past for light and many other atomic particles which have given similar results and have been significant in proving this particular theorem. Now, this experiment has been extended to test the same principles on antimatter as well and it was proven that the same applies to them. Antimatter interferes in the same manner as regular matter does.

Recently, an experiment conducted by researchers with the Quantum Interferometry and Gravitation with Positrons and Lasers (QUPLAS) collaboration demonstrated the phenomena on antimatter particles. The researchers used positrons- the antimatter counterpart of electrons- that were emitted by radioactive material and then accelerated and formed into a beam. Instead of travelling through just two slits, as in the classic experiment, the beam went through two sequential gratings with different spacing between the slits. This setup helped magnify the effects the researchers needed to measure. The positrons that survived the trip hit a detector, where they formed an interference pattern. Even though the wave-particle duality has been established in the past via diffraction experiments, the QUPLAS team are the first to show the wave nature in a single positron. The interference pattern was studied to establish the wave nature by analyzing the high and low points of the wave.

This experiment further confirms the fact that the behaviour pattern of antimatter is similar to ordinary matter. This adds experimental evidence to various theories which deal with the interaction study between matter and antimatter, especially those dealing with studies related to the early universe. It has been theorized that at one point after the big bang, the amount of matter and antimatter was the same in the universe and thus there was just nothing. Then for some mysterious reason, the amount of matter became slightly more than antimatter and that pushed our universe into what it is right now. The experiments such as these help us in finding and piecing together the answer to this question and can help us answer the big question of what happened during those early times.

While there is still a lot to uncover in the complete understanding of the antimatter, this experiment proves to be a big step forward. There are still major findings left to uncover pertaining to how gravity affects these particles. Even though Einstein hypothesized that gravity works the same way on them, many theories suggest otherwise. So we could be looking at some unknown working of one of the fundamental forces of nature or just another reason as to why Einstein was the genius that he was.