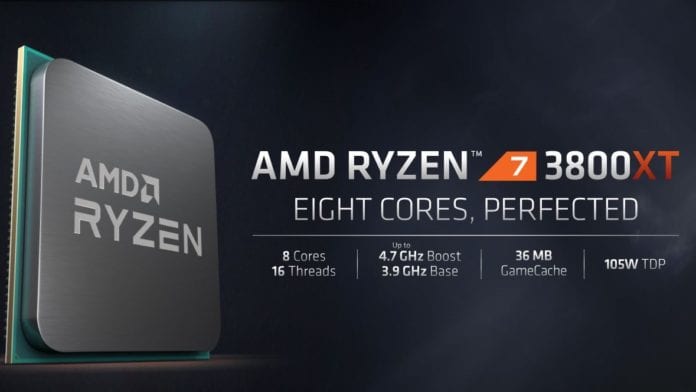 When AMD announced that they’ll be refreshing the Zen 2 Ryzen 3000 CPUs ahead of Zen 3’s arrival, I was a little skeptical. The Ryzen XT CPUs are still built on the same 7nm process, and they don’t pack any “new” features. Why would anyone who already own a Ryzen 3000 CPU got for a slightly updated CPU? Well, today we’ll find out the answer to just that, with the Ryzen 7 3800XT.

Alright then, the 3800XT’s only advantage is a higher boost clock, right? Well, the performance advantage is quite decent for that. Ryzen CPUs have always provided good value, but their slower clock speeds have always resulted in lower gaming performance when compared directly with Intel. After all, that’s why Intel can still claim to be the “gaming king” when it comes to their 10th gen CPUs, which are still using an older (but refined) 14nm process. Perhaps the higher boost clocks will help in decreasing that gap? Here are the results:

We used the following system for benchmarking the CPU:

For testing overall performance, we used a varying set of programs. We looked at synthetic benchmarks, real-world content creation metrics, and in-game performance.

We looked at gaming performance at 1080p. Considering how at higher resolutions the games become GPU bound, rather than CPU bound, we stuck to 1080p. All games were set to their highest preset, with the only exception being Red Dead Redemption 2. More on that here.

Now onto the synthetic benchmarks, here’s what we got:

Cinebench is well known to stress the CPU, and during the multi-core test we saw the 3800XT sustain an all-core 3.9 Ghz. During the single core test, the CPU did reach 4.4 Ghz.

Onto other benchmarks then:

During the CPU benchmarks with Geekbench, it was a little weird to notice that the CPU had a boost clock rating of 4.5 GHz, when on AMD’s own website it mentions 4.7 GHz as the highest boost clock.

I should add that while the CPU is rated to boost up to a high 4.7 GHz, that’s subject to many factors like thermal paste, cooler, motherboard design, etc. AMD’s Ryzen CPUs are known to be quite sensitive to temperature. With that said, I did notice one core reach 4.5 GHz during the Witcher 3 benchmark. During general gaming, the CPU sat around the 4.3 GHz mark, and this is with the mediocre cooling setup that I have. During typical desktop usage, the CPU sat around 4.3 GHz.

Verdict – More of The Same

It feels like AMD took a page out of Intel’s book when they decided to refresh last year’s excellent lineup. The core advantages that those brought to the market are still here, only accentuated a little by the increase in clock speeds. However, the decision to scrap the Wraith coolers from the packaging does hurt the experience. AMD’s reasoning for that might be a little questionable, depending on whom you ask.

However, even with the wraith cooler you probably wouldn’t have been able to hit those high clock speeds anyway. Another thing that the speed increase brings is better performance in gaming, albeit keeping the same minimal power draw the original Ryzen 3000 CPUs. If you’re on the market for an upgrade from an older Intel/ Zen 1 platform, then this might be it for you. Remember, last year’s Ryzen 3000 offerings are still available in the market, and for a lower price than the XT refresh, and they all include a cooler. But if you’re willing to wait, then maybe Ryzen 4000 will better suit you when that finally launches.