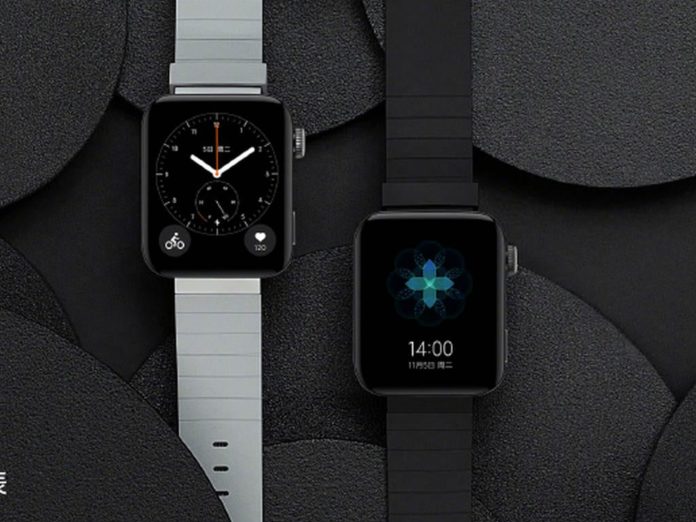 November 5th is going to be a big day for Xiaomi. While the company has been in the wearables business for some time now, it is for the first time that it’ll be launching its own smartwatch. The watch is simply going to be called the Mi Watch, according to the leaks and rumours. It will go official alongside the Mi CC9 Pro/ Mi Note 10 on November 5.

Ahead of the launch, lots of details have already been revealed through innumerable leaks and rumours flooding the internet. In fact, Xiaomi itself has officially teased the Mi Watch days before the launch. The image in the teaser made it quite clear that the design of the watch is inspired by the Apple Watch.

The watch has an almost-identical rectangular touchscreen face and a lookalike rotating ridged crown button for scrolling. Also, located on the right side of the watch is a similar-looking pill-shaped button. The placement of the buttons and the crown is exactly where you’d find them on an Apple Watch.

Although the Xiaomi watch has a little thicker and less rounded face than the current Apple Watch Series 5, you can still easily mistake it for an Apple Watch.

Ahead of the launch, the Mi Watch has been subjected to several leaks and rumours and Xiaomi has confirmed some of them. Here’s everything we know about the upcoming smartwatch.

Huami, Xiaomi’s exclusive partner and sole supplier of wearables, made a smartwatch called Amazfit last year and it too looked a lot like the Apple Watch. Xiaomi being an investor in Huami makes it quite unclear whether Huami will be in charge of making the Mi Watch.

For now, the Mi Watch will be launching exclusively in China. As of now, there are no reports on whether the smartwatch will come to India or not. Well, considering Mi Bands popularity in the Indian market it is likely that the Mi Watch will make it to the country.