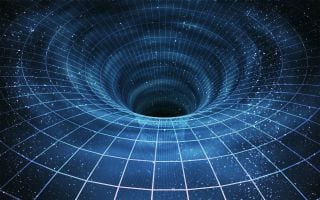 Wormholes have been an integral chunk of science fiction for quite a long time now. Whether they do exist or not is an entirely different subject which is still being extensively researched upon. Assuming they do exist, scientists have revealed information on how to spot a wormhole in space.

A wormhole (or Einstein–Rosen bridge) is a speculative structure linking disparate points in spacetime. It can be visualized as a tunnel with two ends, connecting two different times or places within the universe – or another universe entirely.

Researchers hope that they spot an intergalactic tunnel in the centre of ‘Sagittarius A*‘, which is a massive black hole in the middle of the Milky Way. According to them, the extreme and turbulent conditions in the centre of a black hole is the most likely place to spot wormholes.

Gravitational flux travels through a wormhole, which means that if there are stars on one end of the tunnel, celestial bodies on the other end will experience forces. Thus, we could detect whether or not there is a wormhole in the middle of our galaxy by looking for slight deviations in the orbit of nearby stars.

Here’s what Dr Stojkovic, cosmologist and professor at the Buffalo College of Arts and Sciences, had to say-

“If you map the expected orbit of a star around Sagittarius A*, you should see deviations from that orbit if there is a wormhole there with a star on the other side. Even if a wormhole is traversable, people and spaceships most likely aren’t going to be passing through… Realistically, you would need a source of negative energy to keep the wormhole open, and we don’t know how to do that. To create a huge wormhole that’s stable, you need some magic.”

So the concept of wormhole travel seems highly unlikely within our lifetime. In spite of this, one must not give up. These tiny progressions in science are what alter the course of humanity in centuries to come!