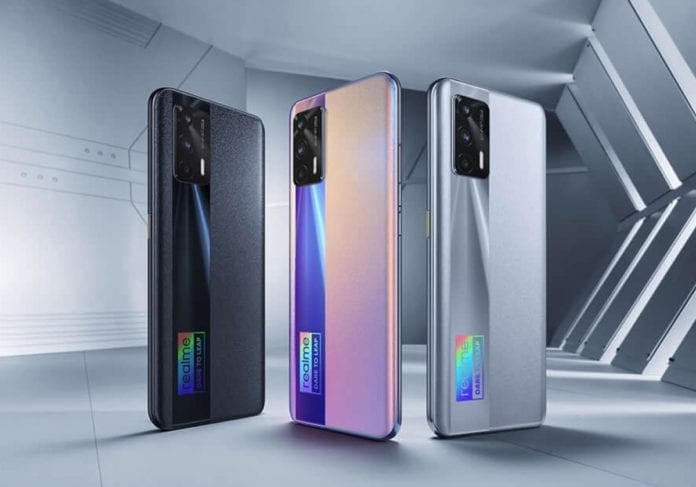 Realme X7 Max 5G sports a similar design as its Chinese counterparts, and even the specifications are no different. The X7 features a 6.43-inch FD+ Super AMOLED panel with a 120Hz refresh rate and a sampling rate of 360Hz. Moreover, it supports a 100% DCI-P3 colour gamut and offers a peak brightness level of 1200 nits.

The Realme X7 Max is powered by Mediatek Dimensity 1200 SoC coupled with up to 12GB of LPDDR4x RAM and up to 256GB of UFS 3.1 internal storage. Furthermore, X7 Max comes with Realme’s proprietary Stainless Steel Vapor Cooling technology to keep the device cool under the high-performance situation. In addition, it boasts a 4500mAh battery with support for 50W SuperDart charging, which promises a 50% charge in 16 minutes. The X7 runs the latest RealmeUI 2.0 on the top of Android 12 out of the box.

In the optics department, Realme X7 Max comes with a triple rear camera setup led by a 64MP Sony IMX682 sensor accompanied by an 8MP ultra-wide lens and a 2MP macro sensor. In addition, there’s a 16MP camera housed inside the punch-hole cutout.

The Realme X7 will be available starting June 4 through Flipkart and Realme’s official website in two configurations.

The X7 Max was not alone, as Realme also brought a new 4K Smart TV to India. The Realme Smart TV 4K comes in two different sizes – 43 and 50-inch sizes with support for HDR10+ and Dolby Vision. In addition, the panel on Smart TV 4K supports 83% of the NTSC colour gamut and boasts Realme’s proprietary Chroma Boost Picture Engine.

Under the hood, the Realme Smart TV 4K is powered by a quad-core MediaTek chipset coupled with 2GB RAM and 16GB, and the TV runs on Android TV 10. It also gets plenty of ports, including 3x HDMI ports, 2x USBs, an Ethernet port, one DVB-T2, and a SPDIF port. In addition, it comes with a pair of 12W speakers and a tweeter with support for Dolby Atmos surround sound.