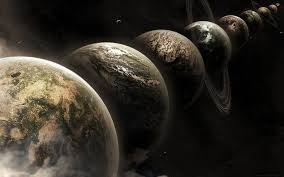 A series of interesting phenomena, one which occurred in 2016, and the other, in 2018 turned scientists’ heads towards a research ongoing in Antarctica. The events which transpired caused researchers to come up with wild theories. One of the theories was that of a parallel universe running alongside ours. This was soon debunked and replaced with something much more plausible. Here’s what happened.

The Antarctic Impulsive Transient Antenna (ANITA) used radio antenna placed on high altitude balloons to catch high-energy cosmic rays and neutrinos coming in from space. Neutrinos are created by exploding stars, gamma-ray bursts and can virtually pass through anything.

In other words, if one wants to view the ultra-high-energy universe, studying neutrinos is the way to go about it. They’re usually caught coming into the earth from outer space, and are a good way to look into the activities of regions beyond the telescopic range.

On one odd day, researchers found neutrinos going upwards. They were found rising up from the Earth’s surface but out of no particular source. Instead of coming in from outer space, they were being detected right below our own two feet.

Scientists were baffled by this phenomenon. Some of the theories included the possibility of a ‘fourth neutrino’ known as a sterile neutrino. This would be a brand new form of particle. Some also thought that dark matter had a role in this.

Here’s where the wild conjecture of the possibility of a parallel universe came into the picture and subsequently, went viral. An article on this went viral and it had the strangest explanation to this interesting occurrence.

They thought that this inverse neutrino required the existence of a topsy-turvy universe created in the same big bang as our own and existing in parallel with it. A universe where positive is negative, left is right and time runs backwards.

There is zero evidence of such a theory being real. Here’s what Ibrahim Safa, a lead author of a research paper on the experiments conducted in Antarctica had to say-

“ANITA’s events are definitely interesting, but we’re a long way away from even claiming there’s any new physics, let alone an entire universe.”

The IceCube Neutrino Observatory is situated near the South Pole and consists of 5160 optical detectors buried in the ice. They detect if neutrinos are passing through and whether they react with the hydrogen or oxygen present underground. Here’s what Anastasia Barbano, an experimental physicist at the University of Geneva, had to say-

“This process makes IceCube a remarkable tool to follow up the ANITA observations because for each anomalous event that ANITA detects, IceCube should have detected many, many more—which, in these cases, we didn’t. That means that we can rule out the idea that these events came from some intense point source because the odds of ANITA seeing an event and IceCube not seeing anything are so slim.”

So far, consolidated reasoning for why this phenomenon occurred hasn’t been created. The academic papers concluded by saying that this discovery is “inconsistent with a cosmogenic interpretation” and maybe has “new physics” involved. Scientists are going to have to wait for the next generation of experiments to get a clear understanding of the anomaly. More likely than not, this finding might just be an error in the instrument. But it for sure isn’t a parallel universe.