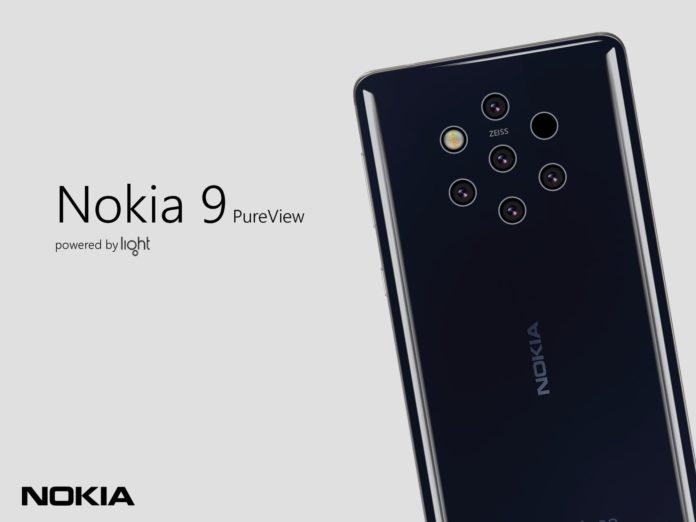 The Nokia 9 PureView, according to all earlier leaks like renders and images, has always been expected to sport a Penta-lens camera system at the back. The flagship, which was supposed to launch in 2018, was pushed to 2019 because of production delays.

Now, a popular tipster has shared an image of the Nokia 9 PureView, showcasing the 5 lens camera system while also giving out the codename for the device.

The tipster, called Evan Blass, tweeted a press render of Nokia’s upcoming flagship codenamed ‘Beholder’. The prominent Penta-lens camera system can be seen on the rear while the front shows an in-display fingerprint scanner. This could also mean the phone will probably have an OLED display since only OLEDs support in-screen fingerprint scanners as of now.

The back is made of glass and is quite glossy and reflective. There’s still no word whether the phone will have Qi wireless charging or not. The front of the phone doesn’t have a notch but does compensate for the lost screen area with a taller display.

The branding on the rear bottom shows an Android One logo, so a stock Android experience without any bloatware can be expected. An Android One device promises the owner around two years of software updates on priority, with the latest security patches. Specs wise, since the Nokia 9 PureView was supposed to launch in 2018 and not 2019, it will feature the processor every Android flagship from 2018 had, the Qualcomm Snapdragon 845, instead of the recently launched Snapdragon 855.

The device is expected to have 6 GB of RAM along with 128 GB of expandable internal storage. The phone will be powered by a huge 4000+ mAh battery. There are no details regarding the headphone jack, but if it’s not there, don’t be too surprised as this is the road every major phone company has already taken.

Pricing is still not revealed but since the Nokia 9 PureView is a flagship phone, the price will surely match the flagships from other brands. The premium glass body with an in-display fingerprint scanner will also cost a premium and this phone is expected to cost somewhere between $800-$900.