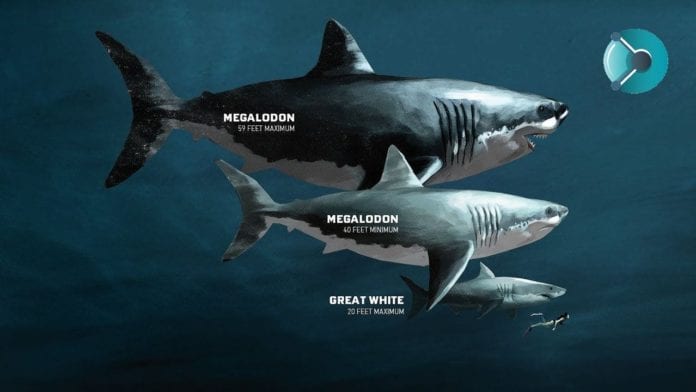 Megalodons are quite popular among the sci-fi fans as a giant shark that could eat anything alive today. Whatever little evidence for their existence we have is in very poor condition; however, we can deduce a lot of facts about how these giants lived in the ocean and what their environment was like. Today’s aquatic predators are nowhere as impressive as the Megalodon. The girth of this giant fish was unusually high, even among sharks. This discovery has come to light recently and could offer some interesting insight into the world of sharks.

The new study, published recently, shows that the fish (which could go up to 50 feet or 15 meters) was highly unusual. The study revolved around the order Lamniformes, the group that included all the extinct and surviving sharks. What the researchers found that the megalodon was not only much bigger than any surviving species of shark today, it blew the competition when compared to the second biggest extinct shark as well. That title is held by a shark measuring 23 feet or about 7 meters, which less than half of what our giant fish could pull off.

The modern line-up when it comes to sharks is a bunch of dwarves when compared to this ancient monster. The great white, which happens to be the biggest predatory species alive, can measure up to 20 feet or 6 meters in length. The largest fish, the whale shark, can measure up to 33 feet or 10 meters. None of these come even close to comparing the monster that was megalodon. There are 13 different lamniform species of sharks alive today, all of which are relatively small. The megalodon fossils date back to 15 million years, whereas lamniformes have been on the planet for 252 million years.

Since sharks are cartilaginous fishes, they do not have bones; what they do have are cartilages that can easily decompose when faced with the elements. This is why researchers do not know much about the internal structure of extinct fish. The biggest source of information on megalodons is their teeth. They grew new teeth throughout their lives and constantly replace old ones. This was one of the focal points of the research where the researchers came up with an equation that relates the tooth size and body size for a lamniform.

The existing lamniformes were cataloged to develop this equation. What the researchers found was astonishing as megalodon simply dwarves any other lamniform when it comes to size. What this means for other ancient species and our knowledge of these ancient ecosystems is yet to be determined; however, this could be the most revealing study ever done on extinct giants.