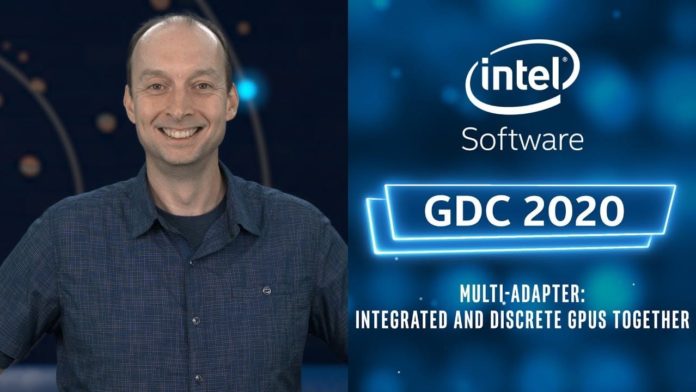 In their recent GDC presentation, Intel claimed that its iGPUs present in its processors can accelerate gaming performance in discrete graphics cards. This is all thanks to the updated DirectX 12 API.

According to the presentation, the DX12 API can now individually recognize the iGPU in the presence of a discrete graphics card. Using the Multi-Adapter Support found in the API, the integrated graphics core can be used to boost the dGPUs performance, by offloading certain functions directly onto the integrated processor.

How does this help Intel specifically?

Well, as we all know, Intel has been including an integrated graphics core in all of their desktop CPUs (save for except a few). All consumer-focused Intel CPUs have an iGPU in them, that you may recognize as Intel HD graphics.

Intel’s strategy here is that they can claim their products to take advantage of the Multi adapter support found in DX12, rendering a bunch of their competition’s CPUs useless in that department. AMD has only been including onboard graphics in its budget Ryzen processors. Higher-end processors like the Ryzen 3600, 3700X, 3900X etc don’t have any included iGPU.

We’ve already gone over how Microsoft’s DirectX 12 Ultimate will help developers in unifying many platforms like console and desktop graphics. Well, it seems like it’ll also bridge the gap between integrated graphics processors and discrete ones from AMD and NVIDIA. It’s also pretty resourceful now that Intel is entering the dGPU business with its dedicated Xe graphics lineup.

Considering how Intel’s Xe GPUs won’t be competing against the NVIDIA Geforce or AMD Radeon lineup, it makes sense to position themselves as a supporter on the side. At least for the time being.