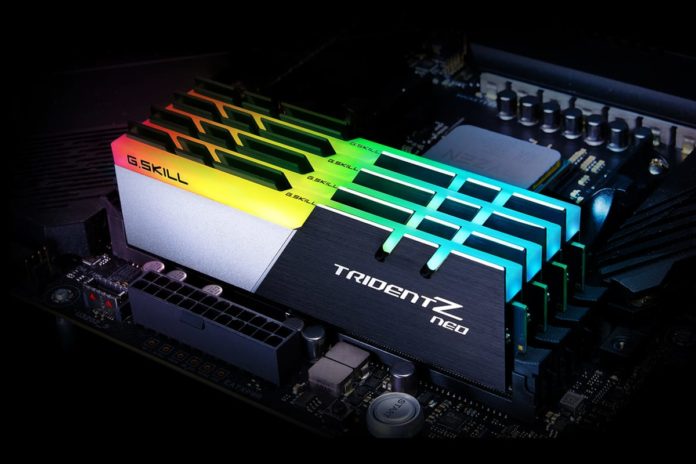 AMD’s Ryzen CPUs have become the go-to choice for the vast majority of PC builders since the platform offers tremendous performance for relatively low prices. The only hiccup, it seems, when buying into the AM4 ecosystem is the choice of memory as Ryzen has always been highly memory sensitive. This is due to the presence of Infinity fabric that AMD uses as its interconnect between Zen core clusters.

Faster speeds and lower latencies provide significant boosts in performance as they directly correlate to the operating speed of the infinity fabric. Add to this the fact that there were also several compatibility issues of certain memory kits with Ryzen and as a result, for a long span of time, reviewers and PC builders only recommended using Samsung’s B-die memory on AM4 as the only viable option to avoid such issues.

Now with the advent of the Ryzen 3000 series, RAM manufacturers like G.SKILL seem to be better prepared and have started announcing compatible memory kits. Their Trident Z Neo series is fully Ryzen 3rd gen and AM4 compatible, claims G.SKILL. The design is sleek (and it also comes equipped with RGB for a free performance boost). The memory is supported by third-party RGB software from motherboard vendors, such as Asus Aura Sync, Gigabyte RGB Fusion, MSI Mystic Light, and ASRock Polychrome. In terms of performance, the Neo boasts speeds of up to 3600MHz at CL 14. AMD also recommends similar speeds for optimum performance.

Corsair has also come out with a statement ensuring full compatibility with 3rd gen Ryzen products. Here’s a link to a list of products that the company deems compatible with Ryzen.